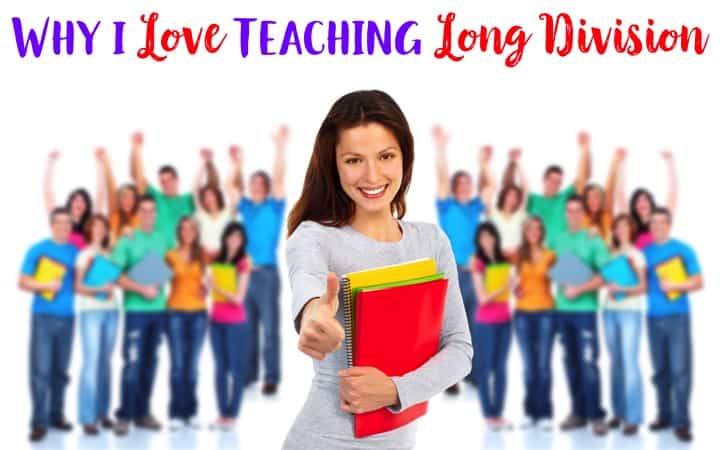 When I found that I would be moving from third grade to fourth grade, one of the units that scared me most was long division. Yes, I had taught fourth grade in the past, but that was way before I ever heard of partial quotient or area models. All I ever knew as a student and teacher was the traditional algorithm. As I said before, it literally took me months to create my division unit, because there was so much I needed to learn first. Once I finished the unit, I had a much better understanding of how to teach long division through partial quotients and area models, so when it came to to begin my division unit I was able to jump right in.

As I began teaching long division through the area model and partial quotient, I became concerned that while my students were learning the procedures they weren’t adequately learning the concept behind the procedures. I did not want the area model strategy and partial quotient strategy to be a series of steps for students to follow without real meaning behind the steps. I wanted my students to fully grasp the how and why of what they are doing and to become flexible in their thinking. Once students thoroughly understand the concept of long division, they can apply those strategies to any division problem, even problems with 2-digit divisors. 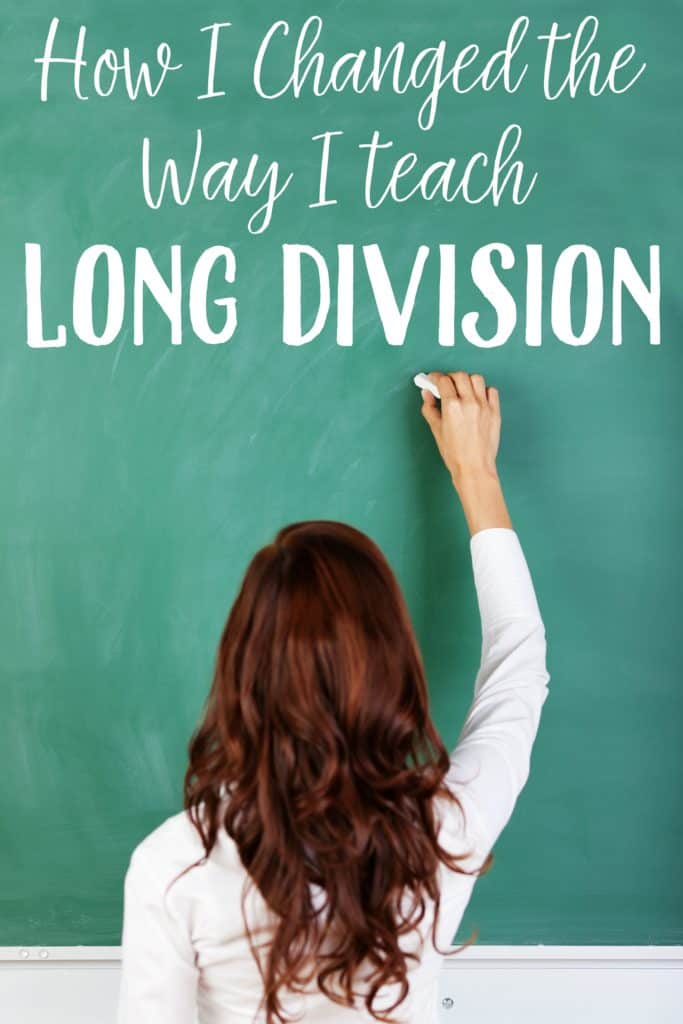 As I moved through my division unit, I had this nagging feeling that something was missing from the unit. My students were doing fairly well, but something was bothering me, even though I had no idea what it was. {Please tell me I’m not the only one that happens to.} After a significant amount of reflection and conversions with other math teachers, I realized that my students weren’t connecting long division to multiplication, properties of multiplication, and their place value understanding. Yes, they could absolutely explain that multiplication and division were inverse operations, and they could easily solve fact family problems, but I wanted them to take that understanding further. Once I saw the light, I immediately got to work at added a bonus week to my Division Unit.

I began by teaching students how to connect place value and division. Students used base-ten blocks and pictures to model long division problems. This activity helped solidify students’ understanding of the concept of long division, and the base ten blocks helped make the concept more concrete. 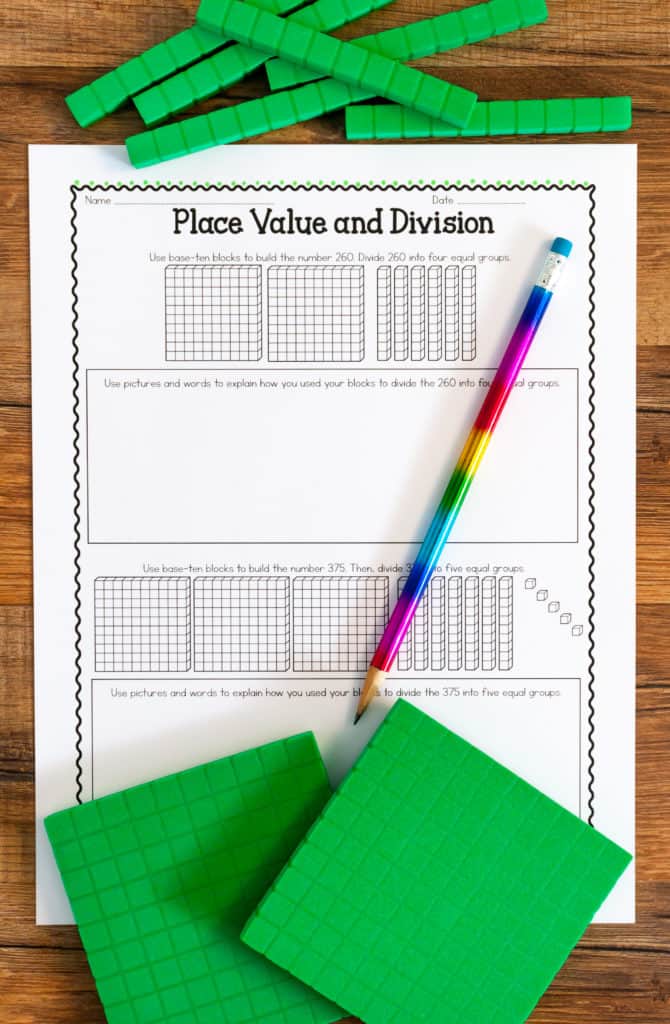 I then taught students how to use multiplication to solve long division problems. While this is fairly simple with problems such as 36 divided by four, where the multiplication fact is memorized, it can be more challening when the dividend is a larger number. In this activity, students broke the division problem into partial products and found the missing number in the partial products. They were absolutely blown away when they saw this strategy for solving division problems! I made sure students understood that I was not necessarily teaching the strategy for mastery, but to allow students to see the connection between multiplication and division. It was also great reinforcement for the distributive property. I began with heavily scaffolded problems and gave students more and more responsibility as they progressed through the assignment. 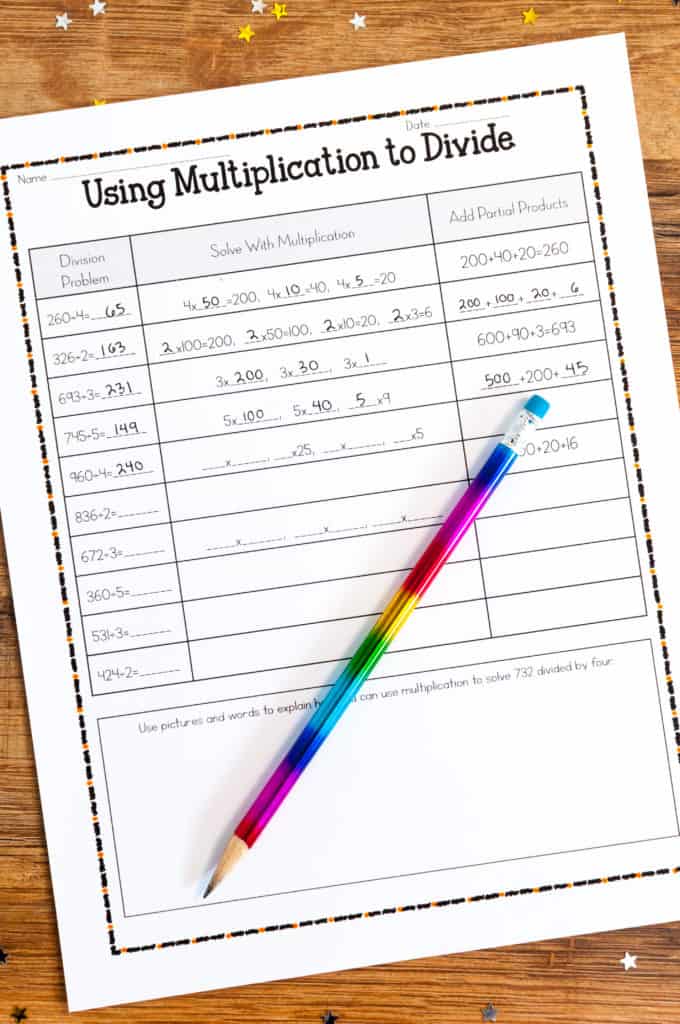 The following day students solved long division problems with division, rather than multiplication. Since this immediately followed the multiplication lesson, this was a natural progression for students, and it actually made sense. They immediately saw the connection between using multiplication and division, and the grouping strategy began to have more meaning to students. 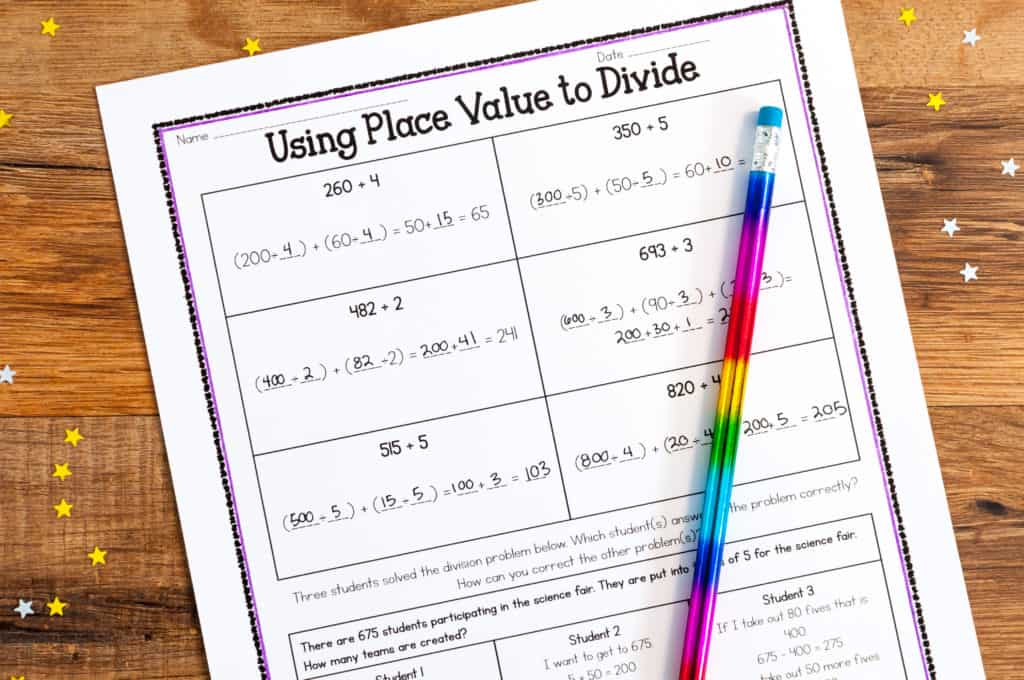 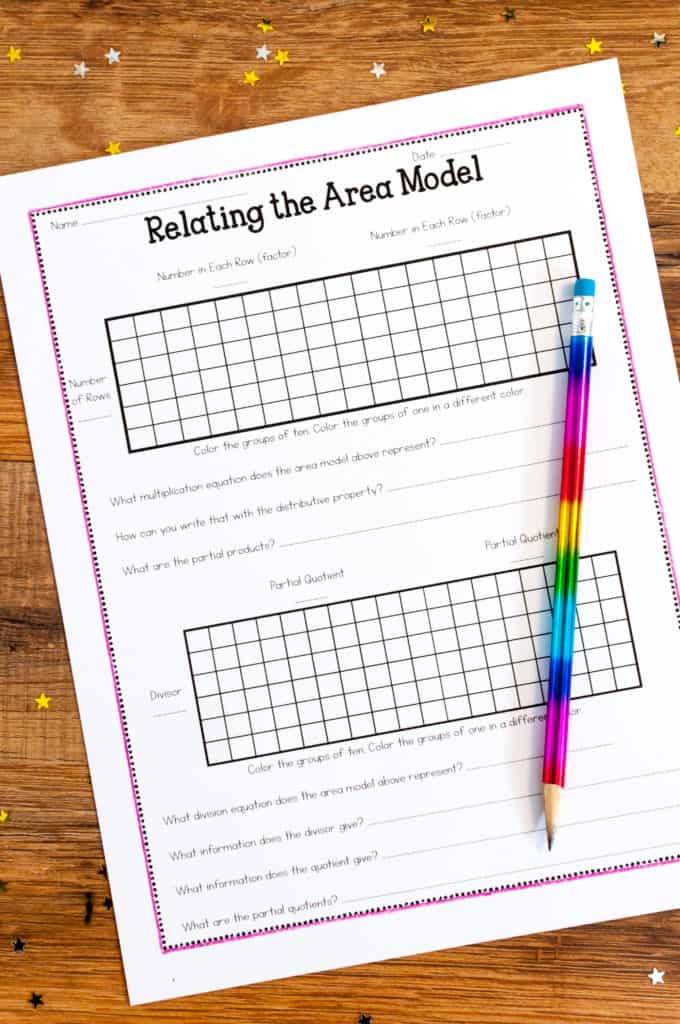 As students progressed through this activity, they became much more efficient at using area models for division. This also seemed to eliminate the confusion that my students almost always seemed to have when they drew arrays to represent multiplication, rather than division. 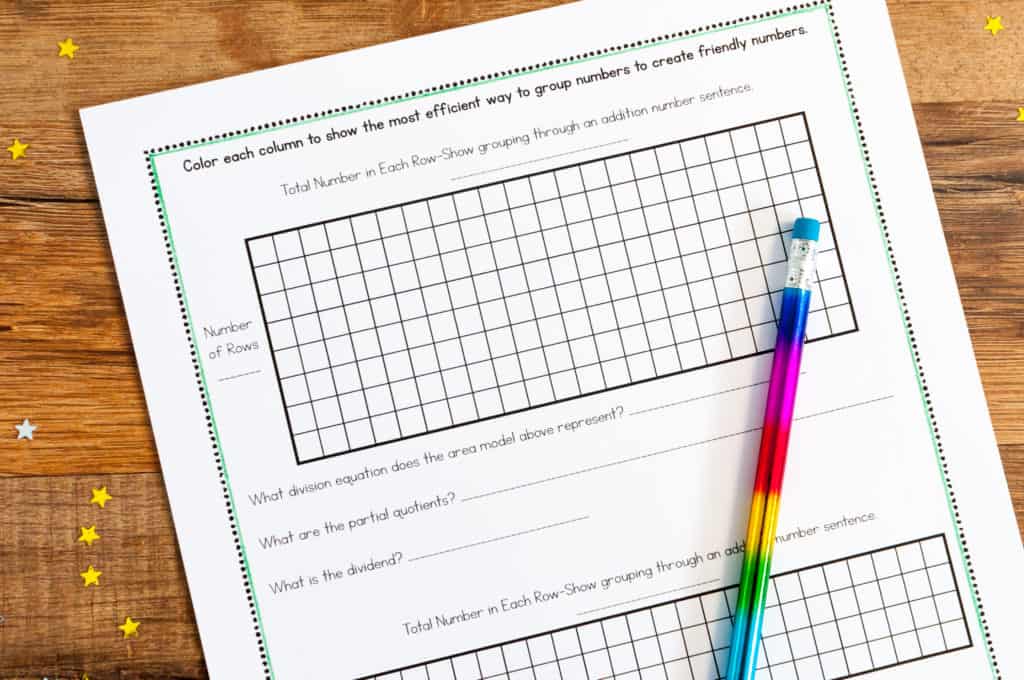 I then progressed into another area model lesson that I taught along with partial quotient. During my instruction, I realized that my students didn’t realize they could use different forms of repeated subtraction to solve long division problems. For instance in the problem below, it would make more sense to take 20 groups of 6 from 150, but if students didn’t automatically see the 20 groups, they could take two groups of ten. I worked hard to teach students that there was more than one way to take groups out of the dividend and still arrive at the correct answer. This was probably the most eye opening moment for students, as it seemed like all the individual puzzle pieces finally clicked together. 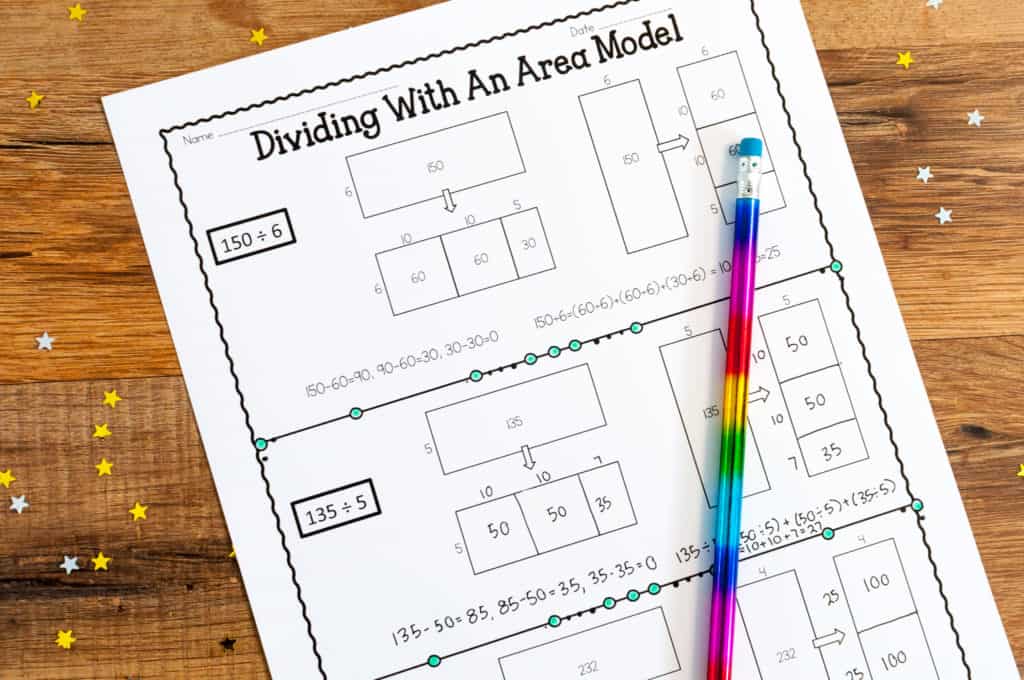 After completing these lessons, the remainder of my long division unit was awesome! I never, ever thought I’d see the day when my students LOVED long division. Seriously, that is no joke. They thought it was the coolest topic ever and felt the need to brag about how easy it was. 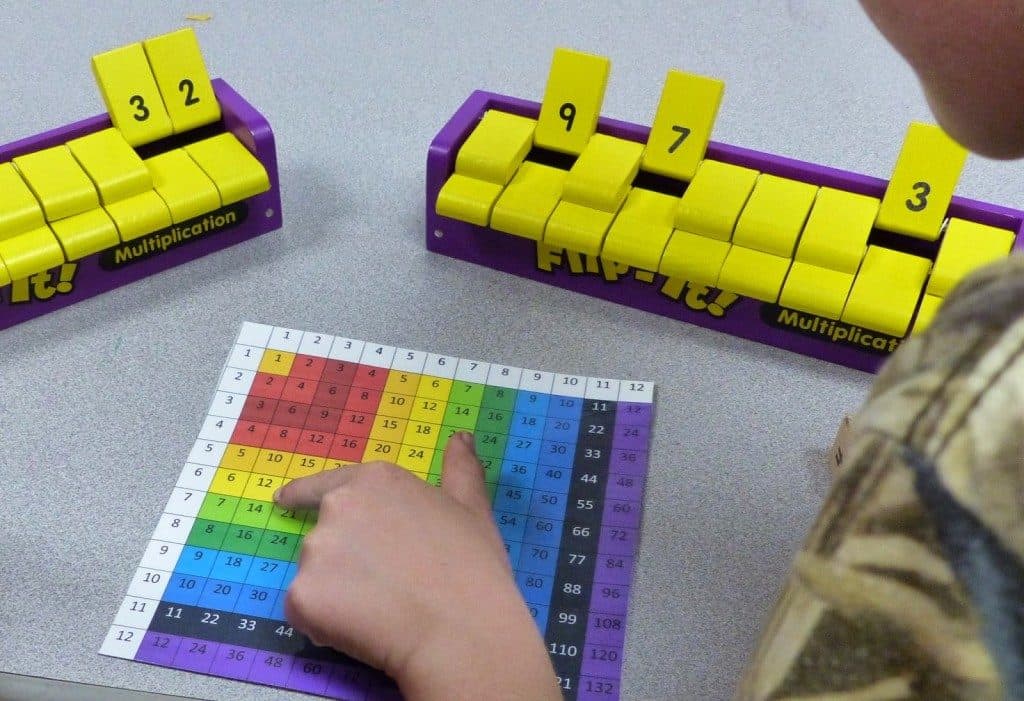 I also created a divisibility rules entry  for my students’ interactive math notebooks. One side lists divisibility rules for 2, 3, 4, 5, 6, 8, 9, and 10. The other side includes six hundreds charts where students shade in numbers that are divisible by particular numbers. You can download the Divisibility Rules entry here. 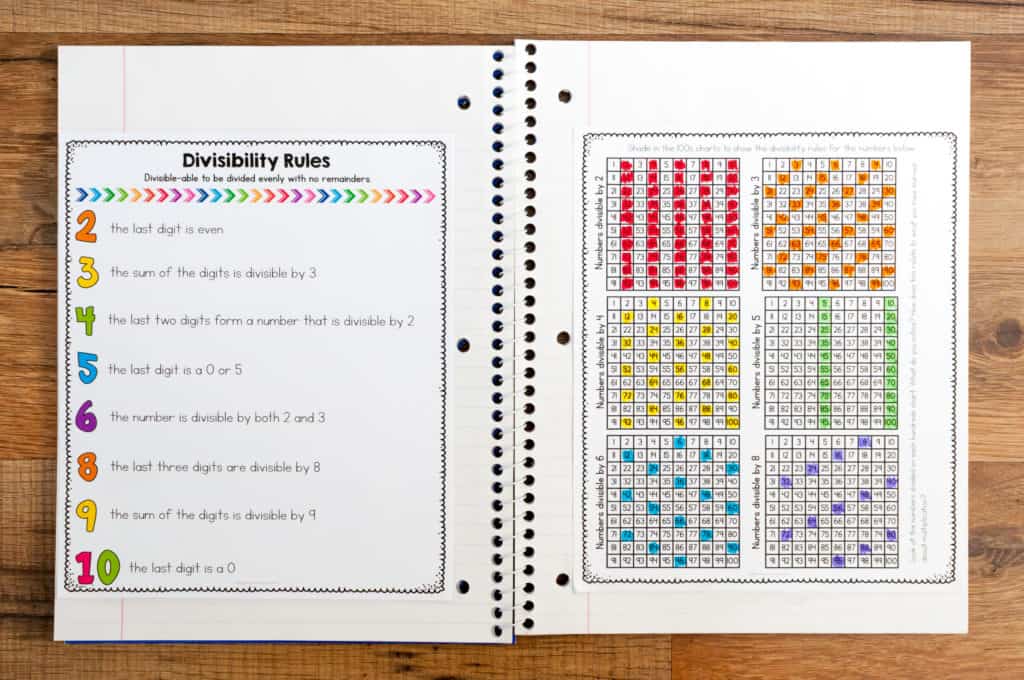 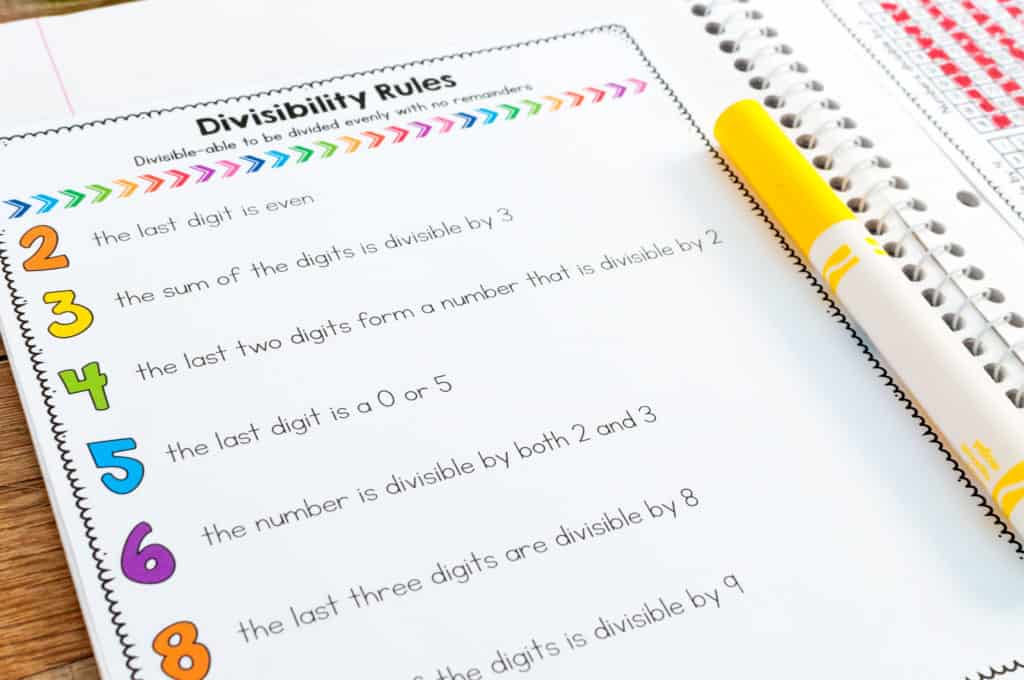 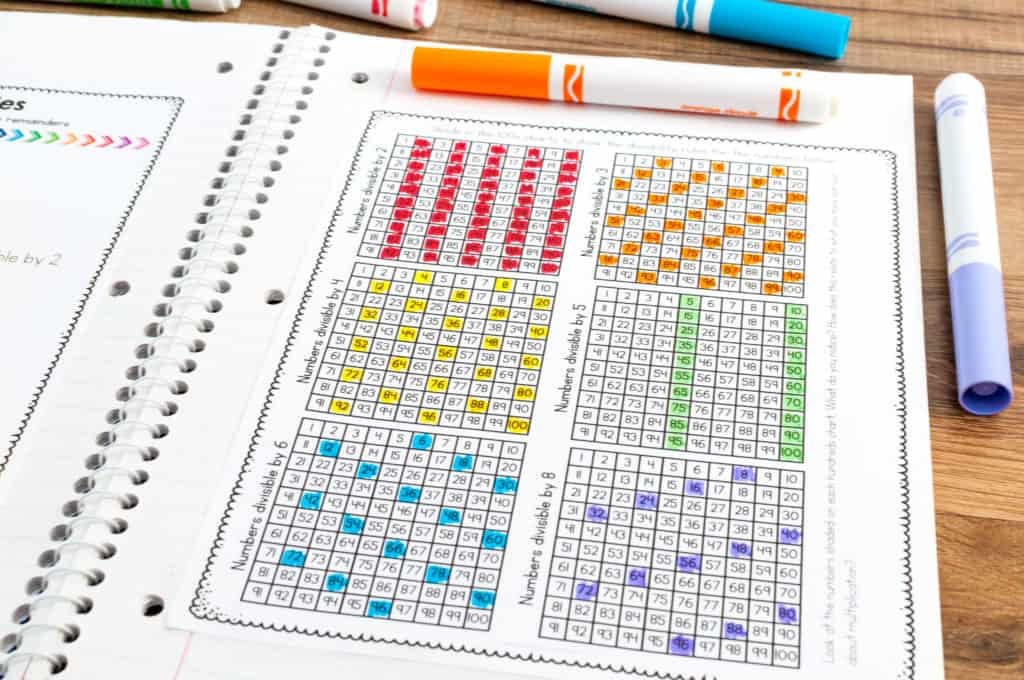 When we finish our division unit, students participate in a division escape activity, which is so much fun. As always, I have a physical and digital version, so locks and boxes are not necessary. 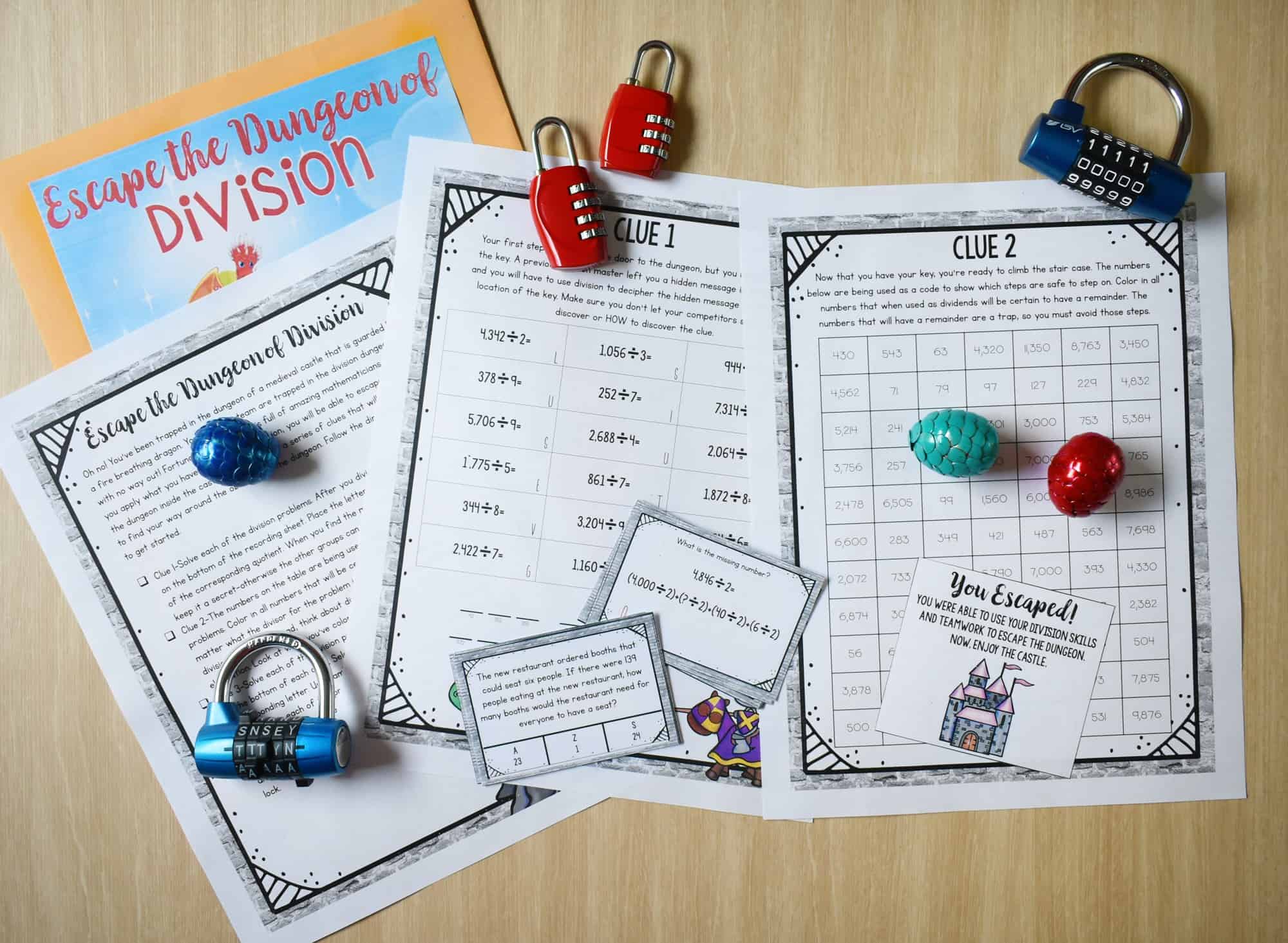 Students solve basic division problems, using any strategy of their choice, to solve the code that will unlock the first lock. Typically, my students divide the problems out and each person in the group solves two or three rows of division problems. 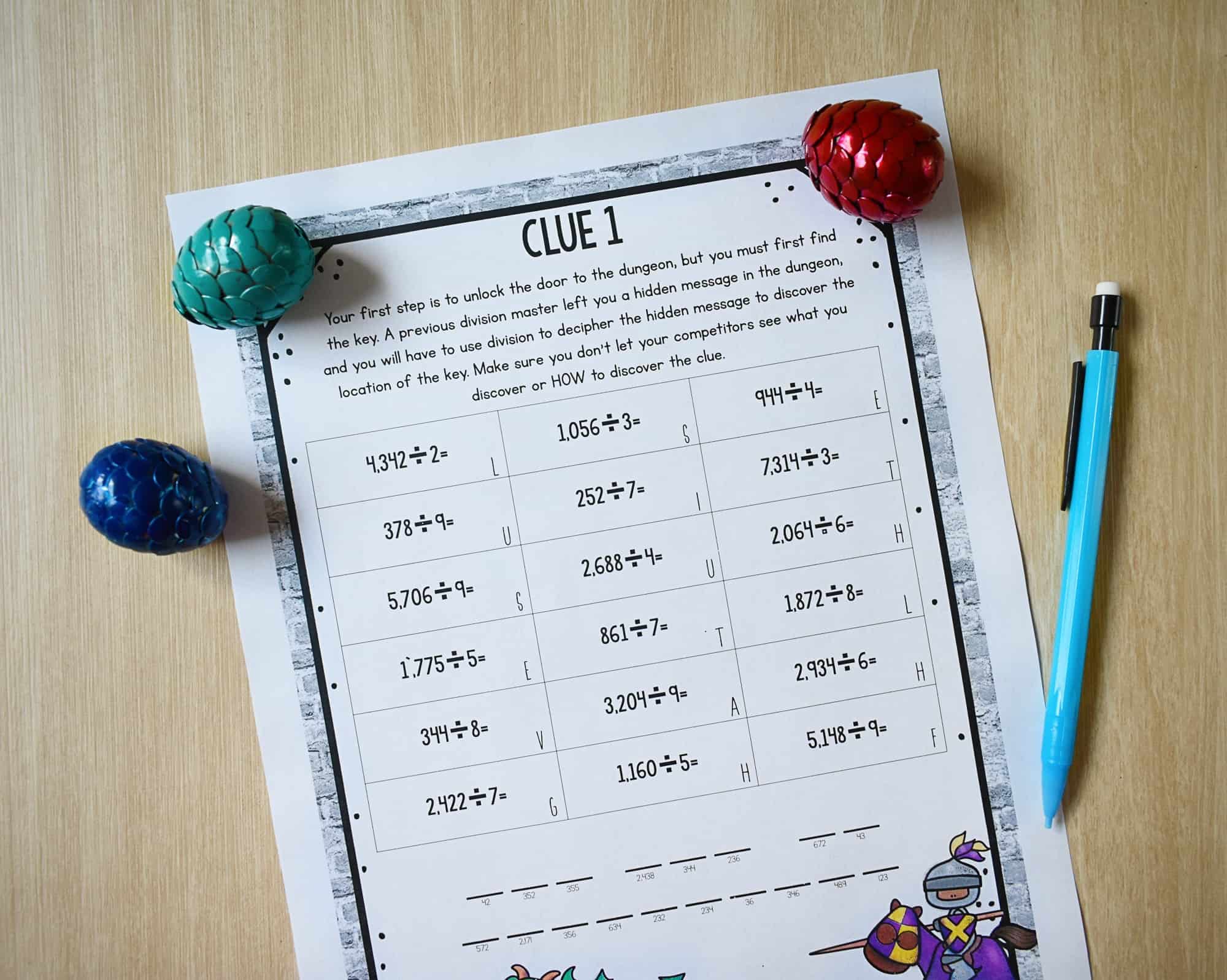 The second clue is always initially challenging for students. It often takes a little guidance and critical thinking to crack the code. In this activity, students must think about divisibility rules and prime numbers. This is a little above my fourth grade standards, but it’s such a beneficial activity for my students. It requires them to think about division and to move beyond a basic level of understanding. I do allow students to use their math reference notes for this activity, because I don’t expect them to have everything memorized. 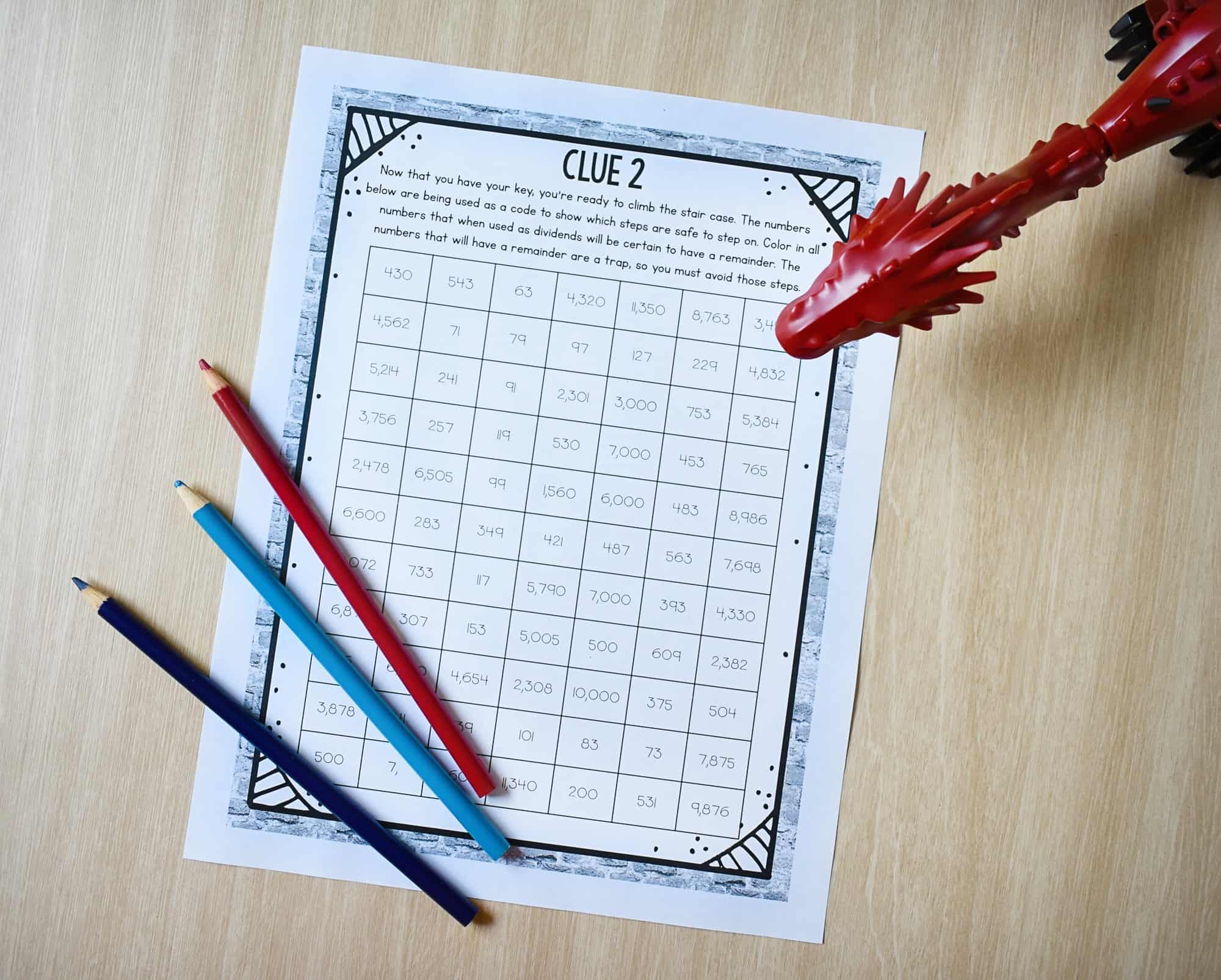 I love the clue where students have to interpret the remainders in word problems. These is another challenging, yet oh so important skill. 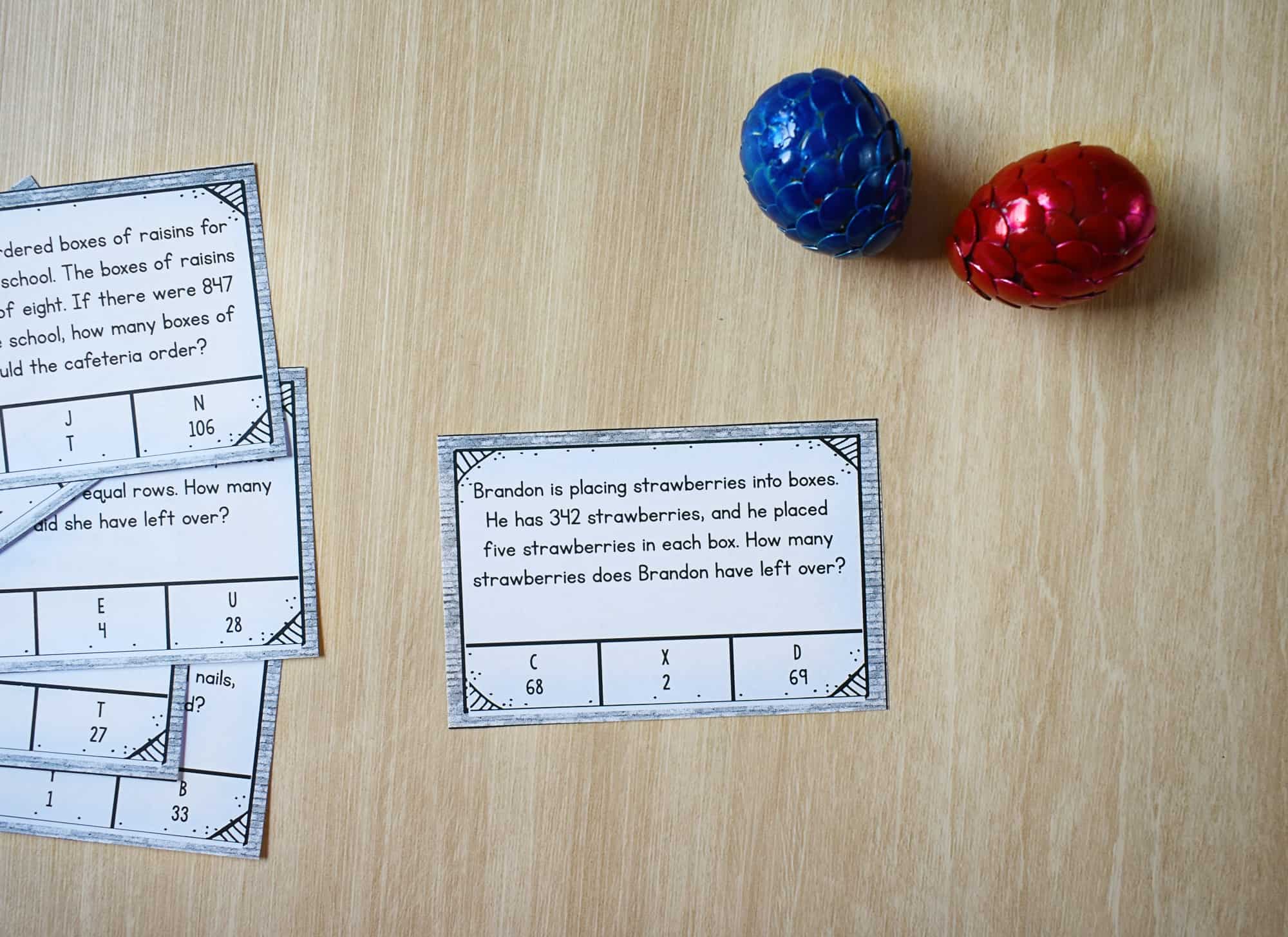 Hopefully, some of these tips, strategies, and printables will help you out as you teach long division.