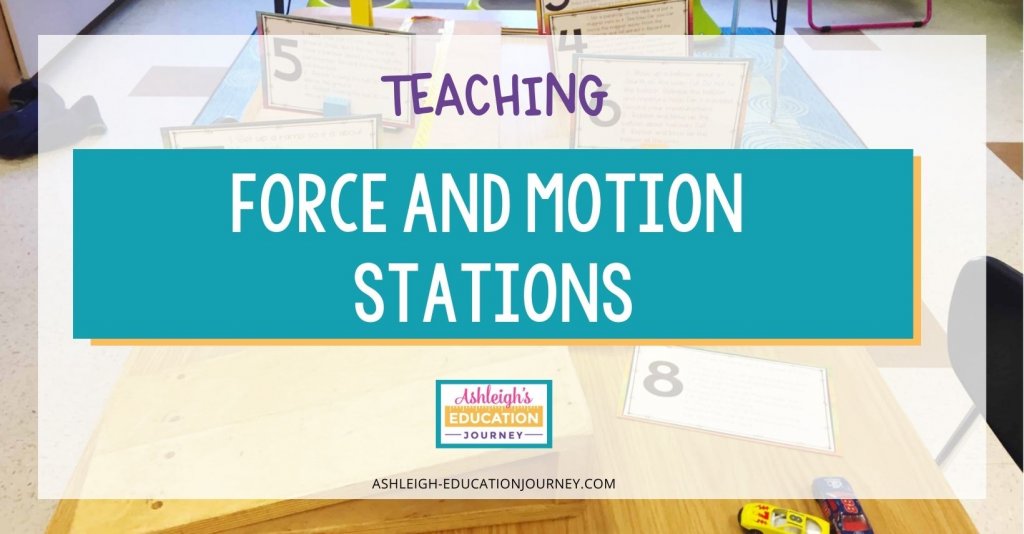 I recently posted Force and Motion Stations in my TpT store. In it, I tried my best to give clear directions, but sometimes a picture is worth a thousand words. I want to share ideas from the stations with you, so that even if you don’t use the printables, you can get some ideas for hands-on activities to teach force and motion.

I’ll be the first to acknowledge that these force and motion stations require some prep and materials, but they’re worth it. Plus, the materials can be used again and again with physical science lessons. I started by collecting everything I needed and setting up anything that required assembly. When my students walked in the classroom, they were SO EXCITED for the science lesson that day! 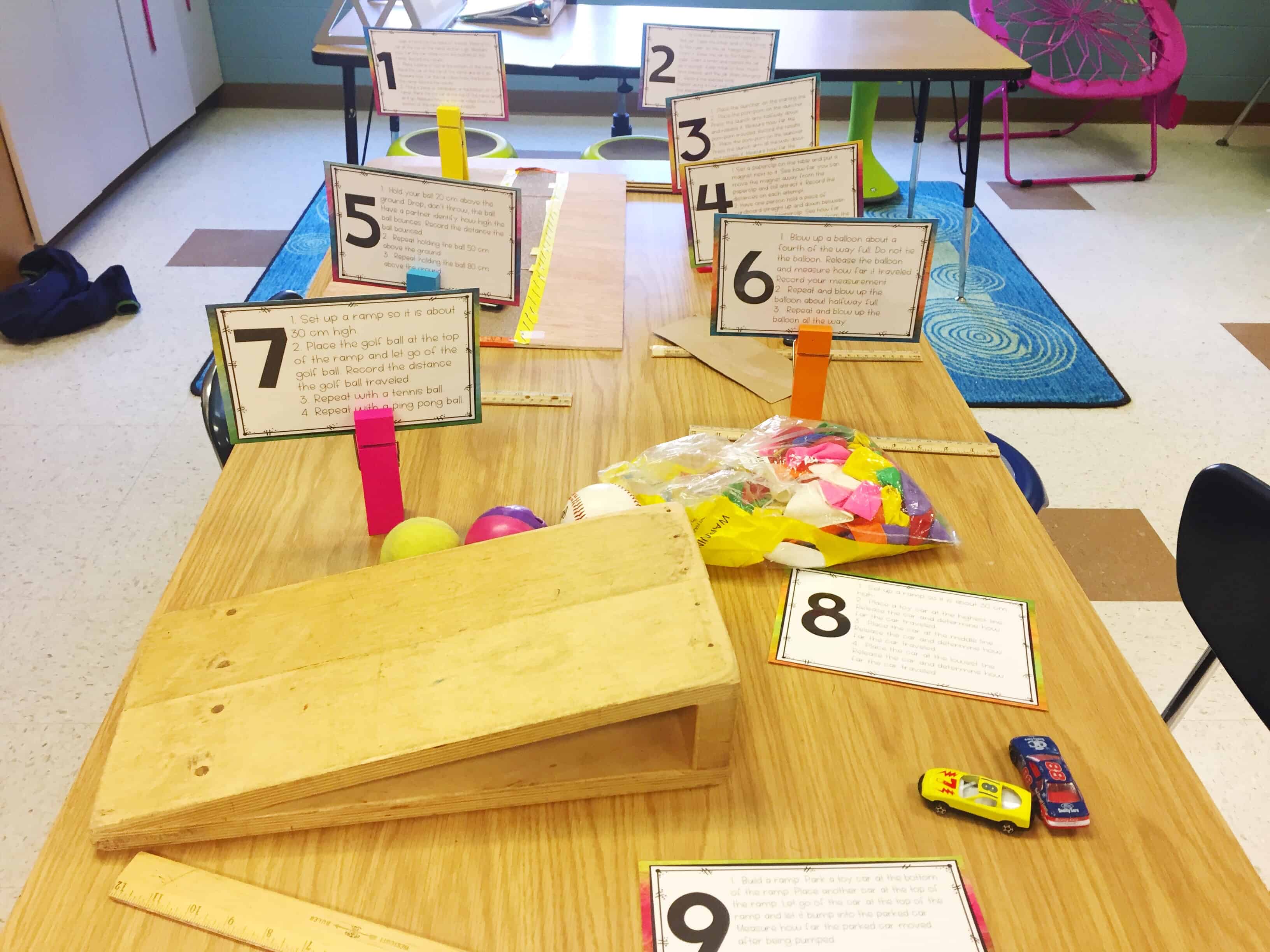 In the first station, students experiment with the effect friction has on toy cars. I built a ramp out of thin plywood. On the ramp, I have a piece of felt and a piece of sand paper. Students roll the car down the ramp on the smooth surface and record how far the car rolled from the ramp. Then, they repeat the steps rolling the car down the felt and then down the sand paper. 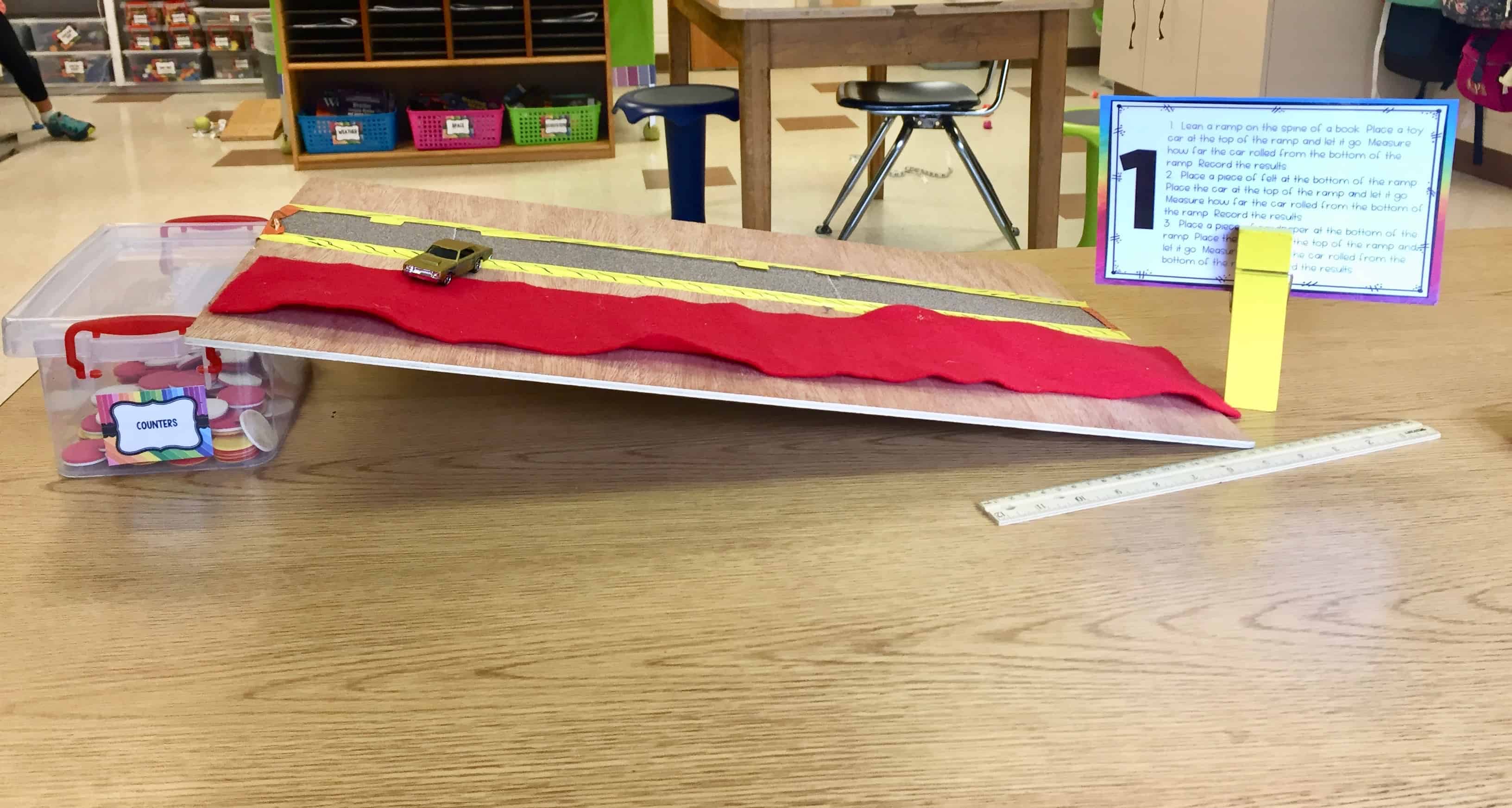 In the second station, students experiment with a pendulum. This is a station where I benefited from going ahead and setting everything up for students. I taped three rulers to the tops of desks. Then I cut yarn in three different lengths and taped each piece of yarn to the center of a different ruler. I tied a plastic jar to the end of each piece of yarn. In the station, students take a jar and lift it to the height of the ruler and let it go. They time how long each jar swings back and forth, so they can compare the movement of different lengths of string. 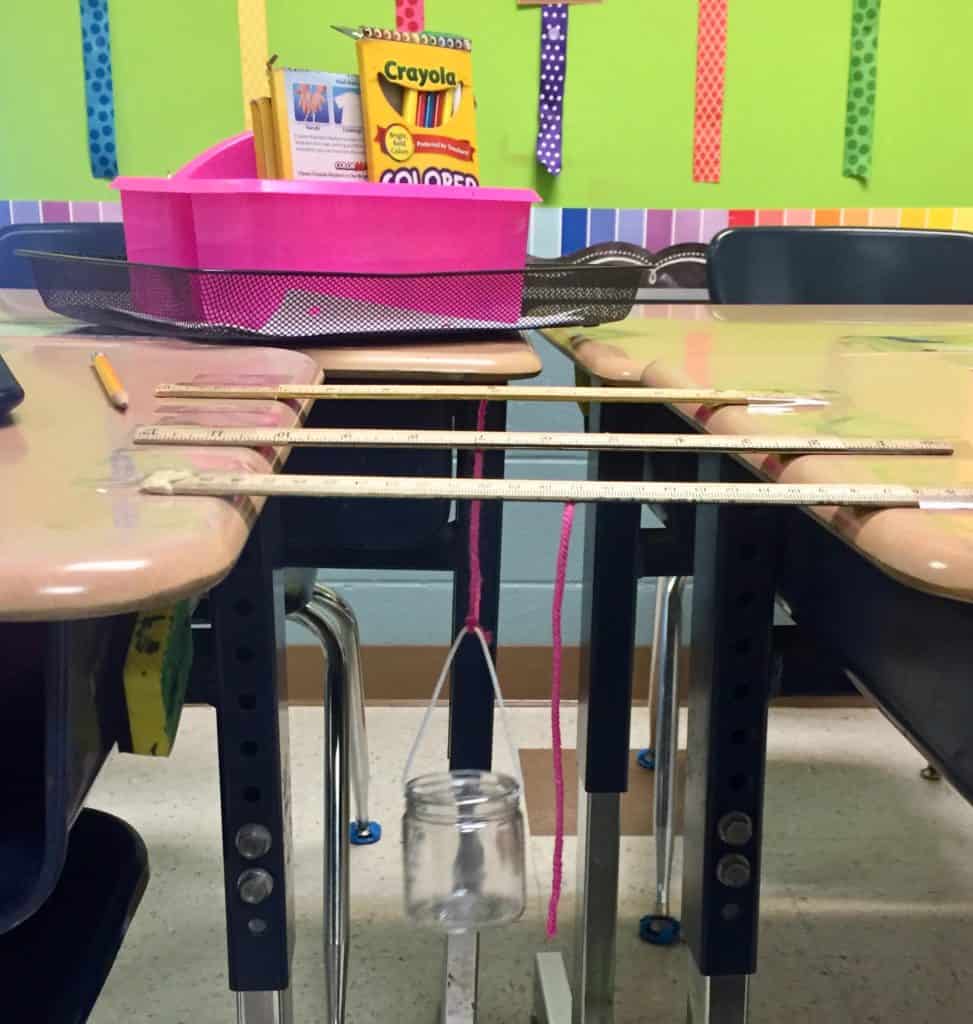 Station three calls for a launcher, which in my mind is just a huge tweezer. Students use the launcher to launch a pom pom, and they learn that the further they press down the top of the launcher, the farther the pom pom will travel. 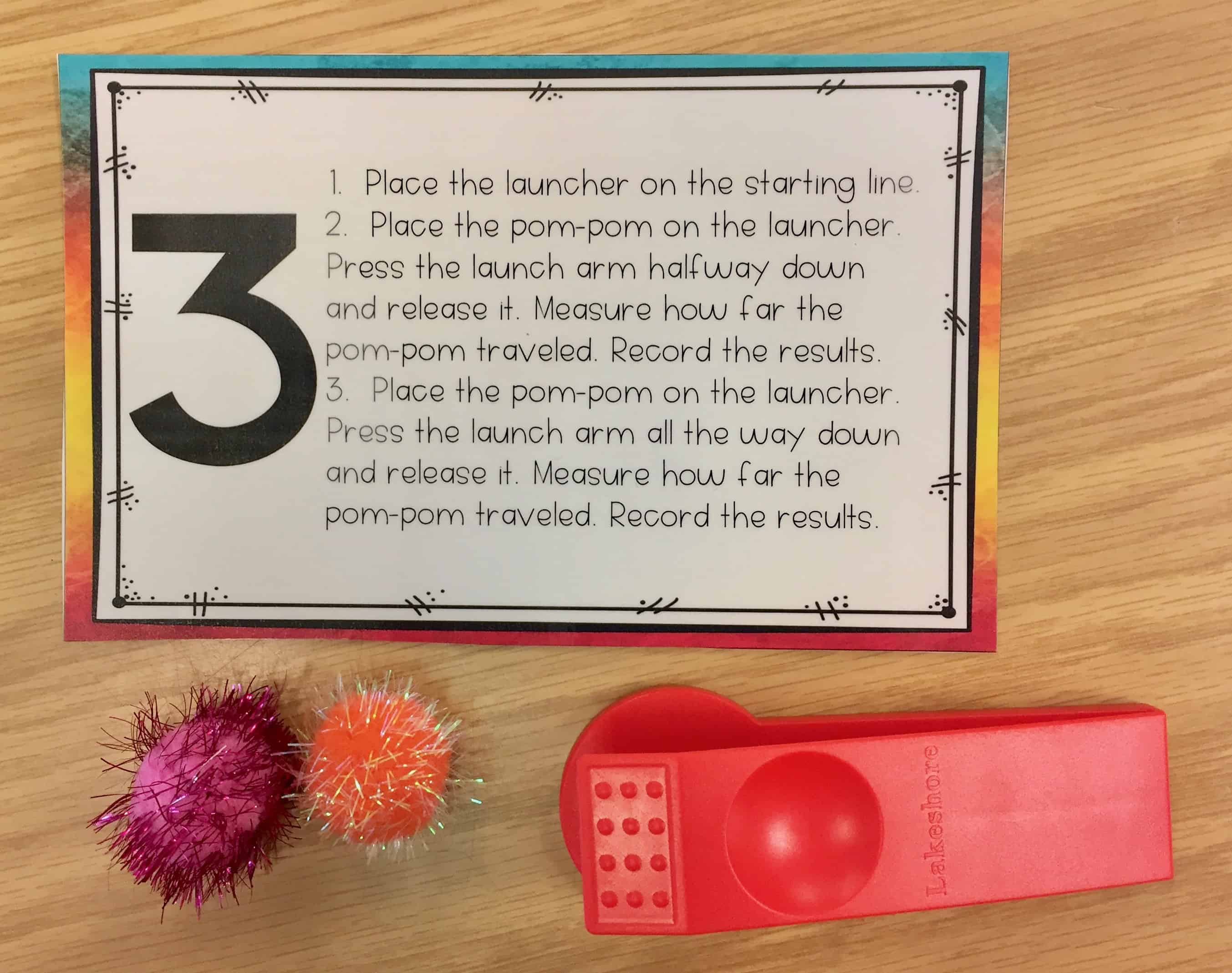 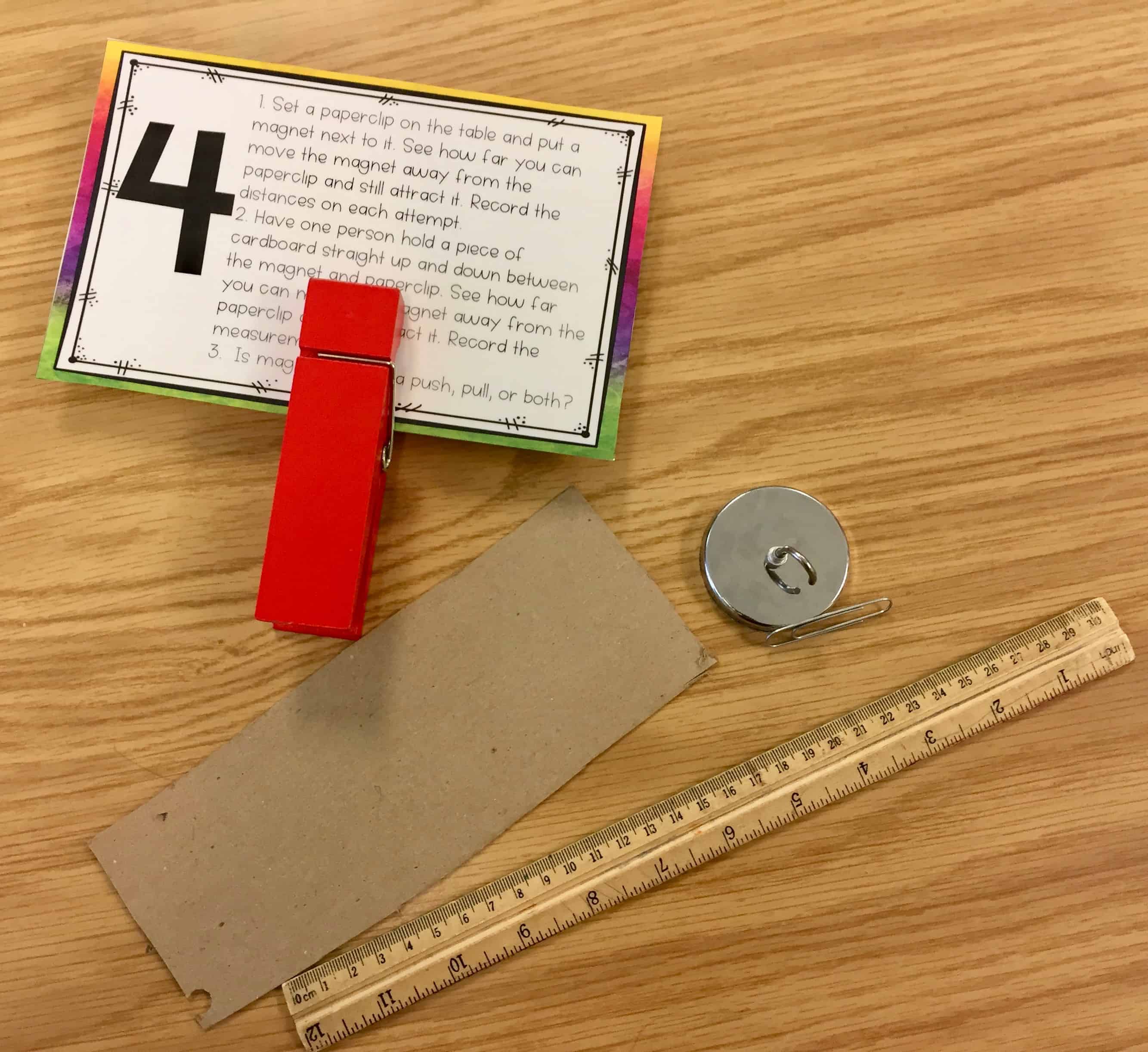 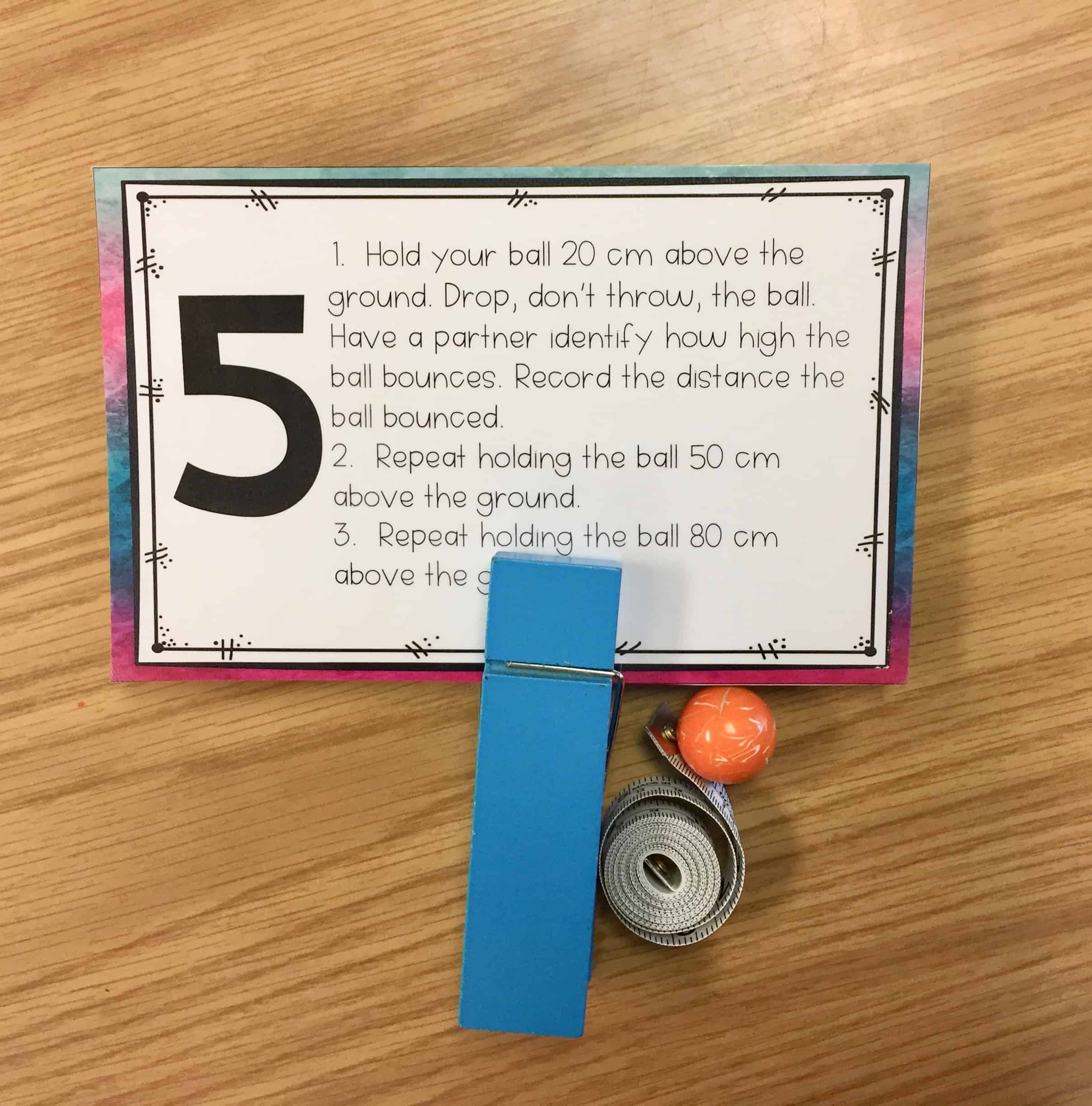 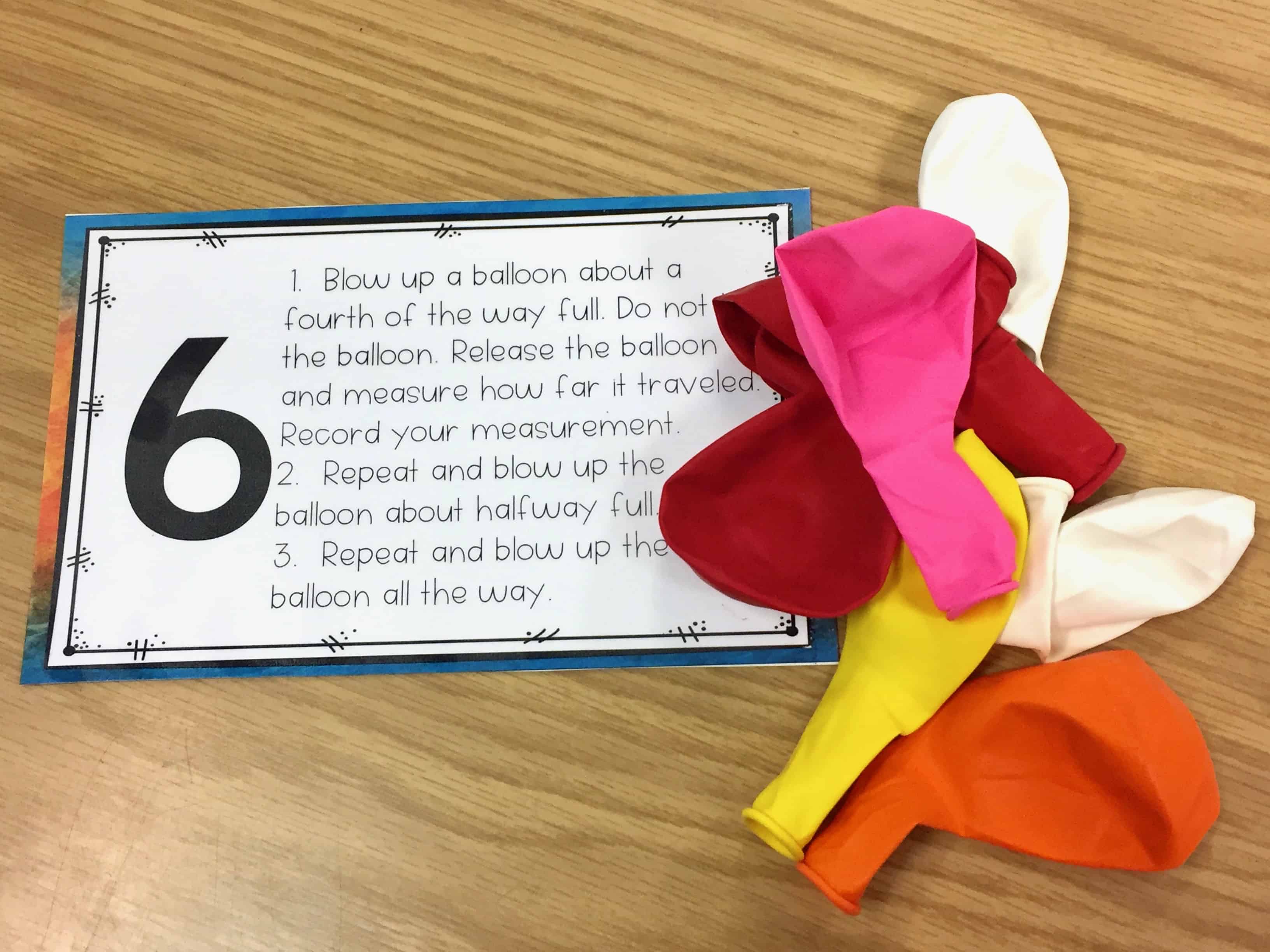 I had to improvise a bit in station seven. I needed a ping pong ball, tennis ball, and golf ball. However, we made it work with a tennis ball, whiffle ball, and baseball. As long as students can see the difference of the distance balls with different masses travel, the activity will work. 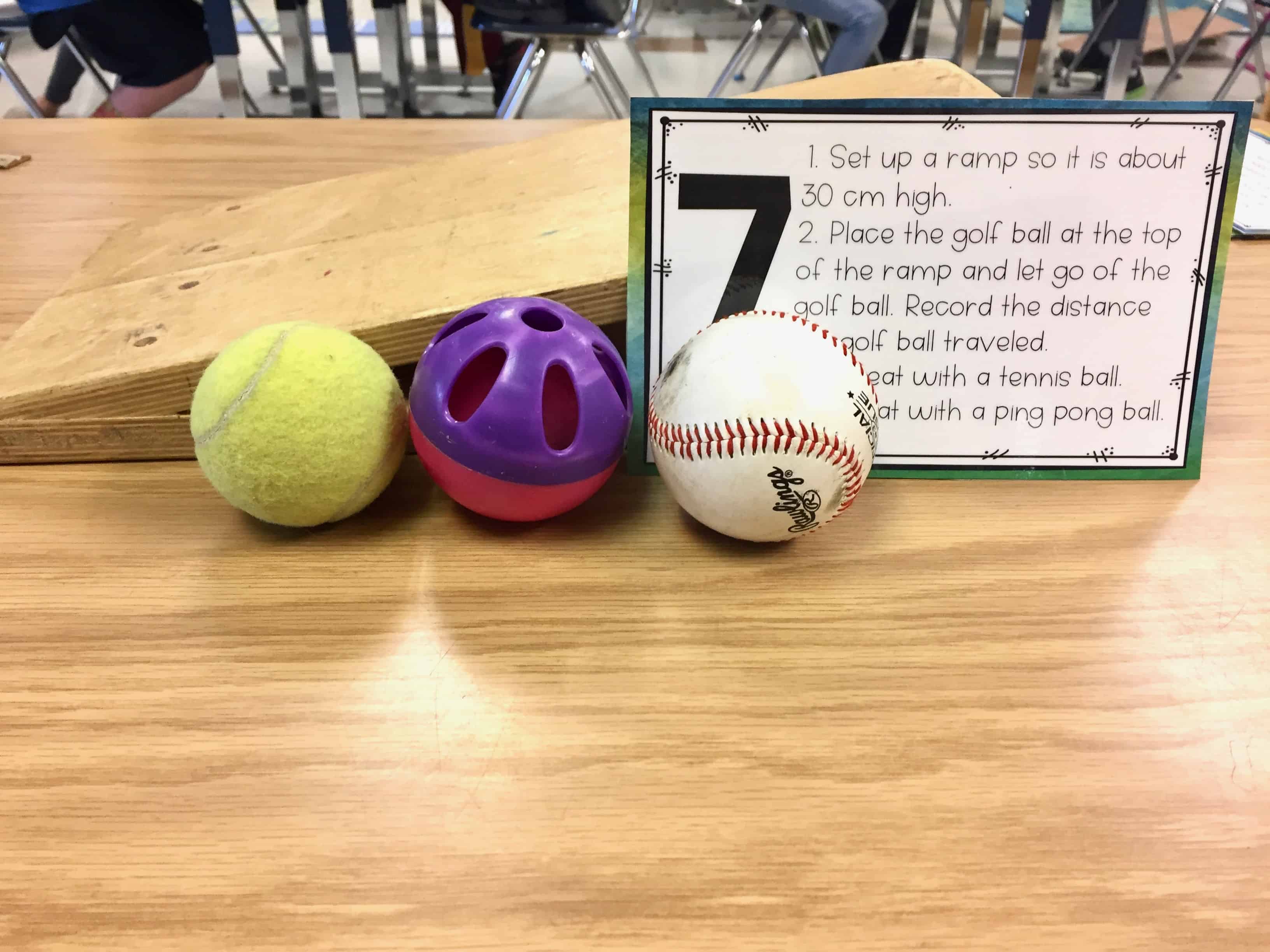 In station eight, students place a toy car at various positions on a ramp and determine how far the car traveled in relation to where the car was placed on the ramp. This activity allows students to see gravity at work. 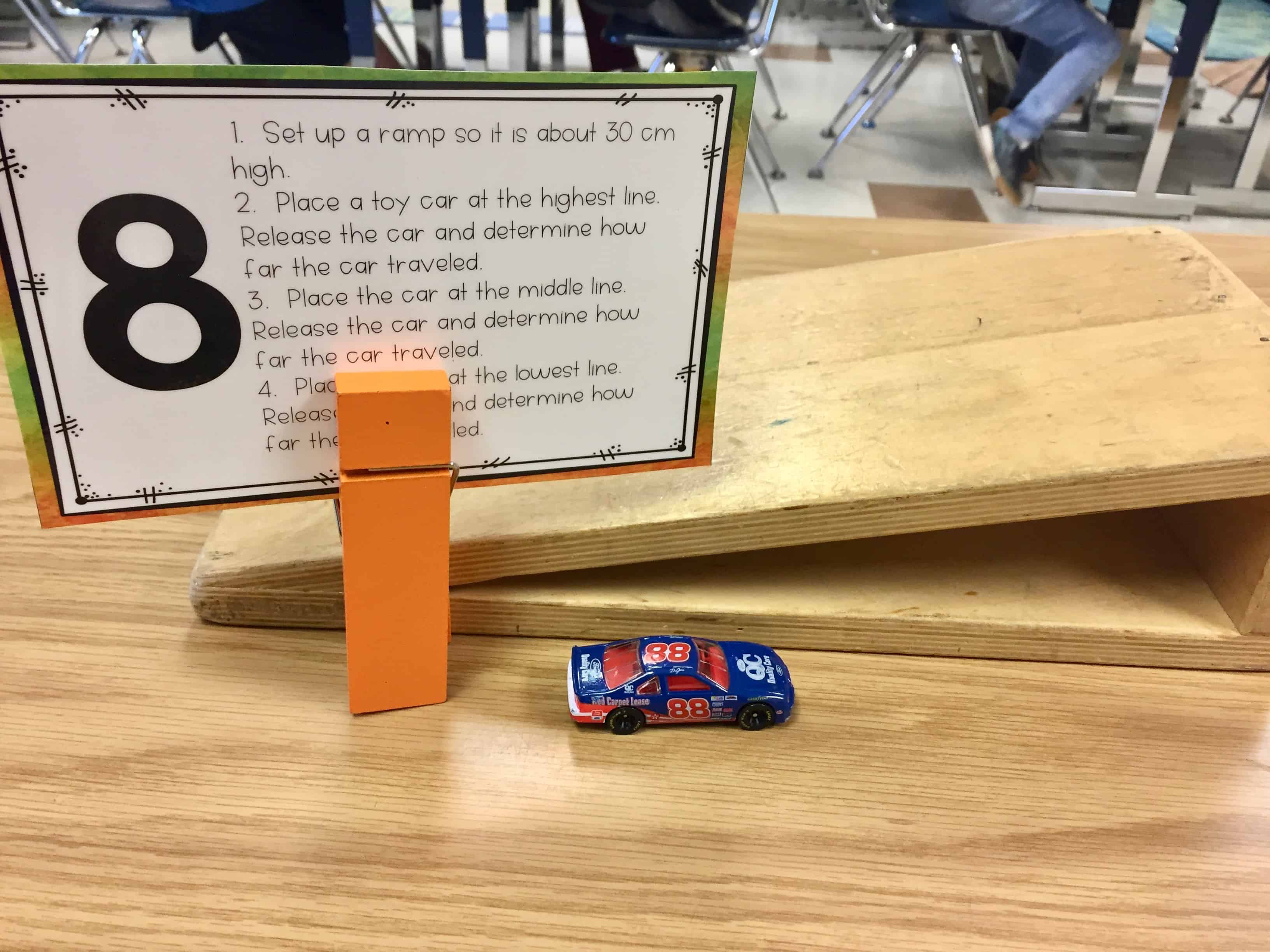 In station nine, students experience with Newton’s second law by allowing two cars to collide in various positions to see the reaction of the two forces. 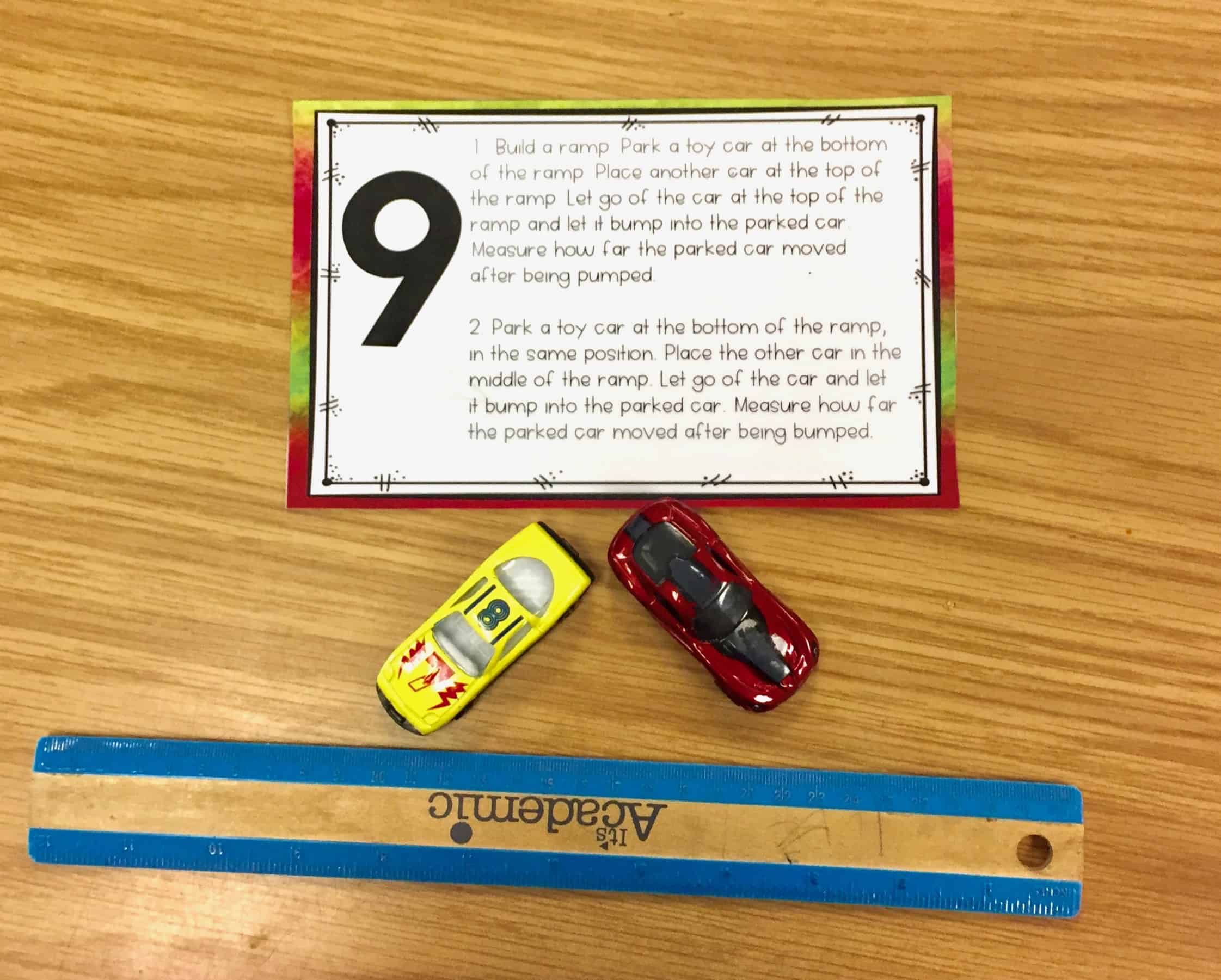 I had my students record all of their information on the recording sheet below. It took us two 30 minute class periods to complete the stations, so I think this is definitely an hour to hour and a half activity. 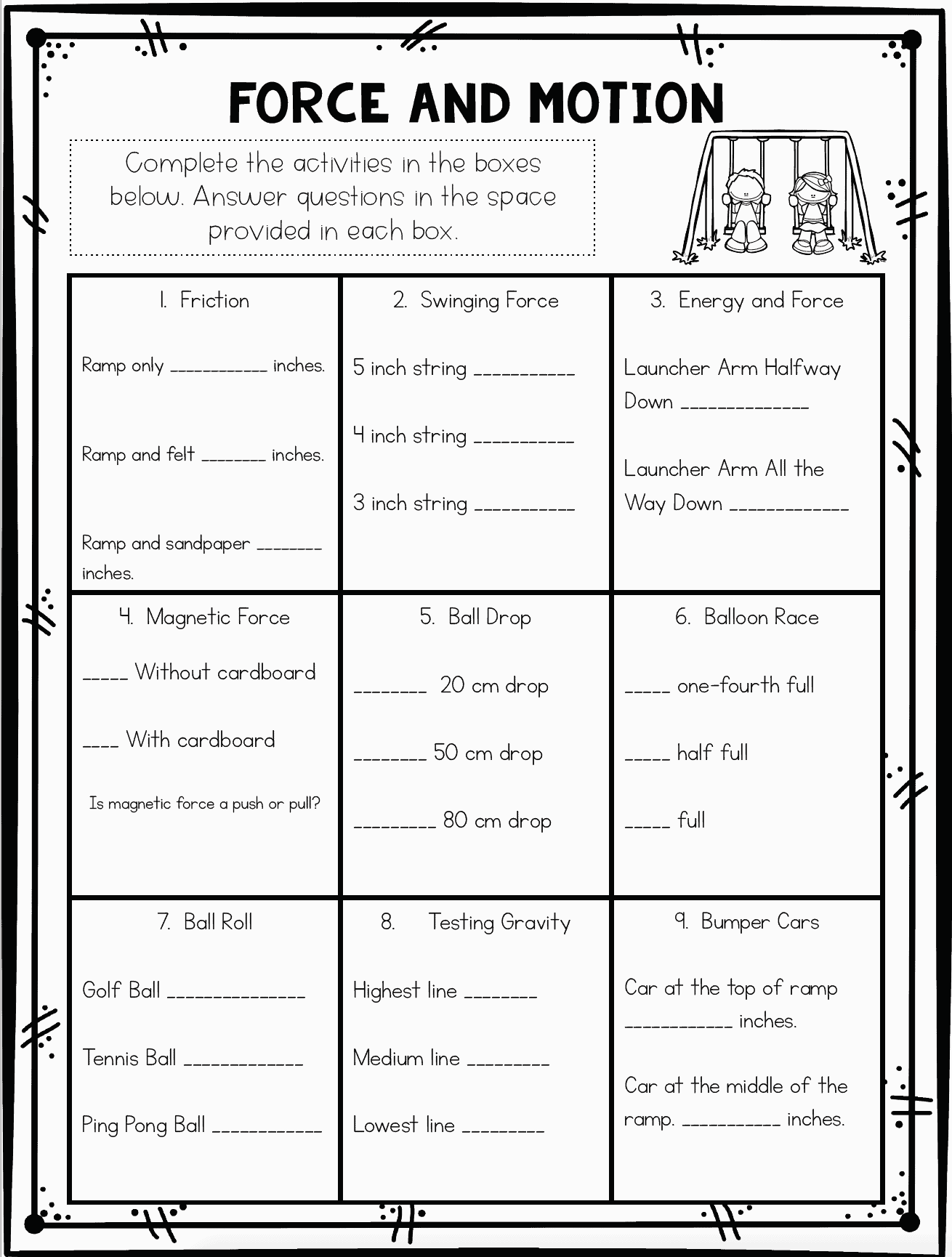 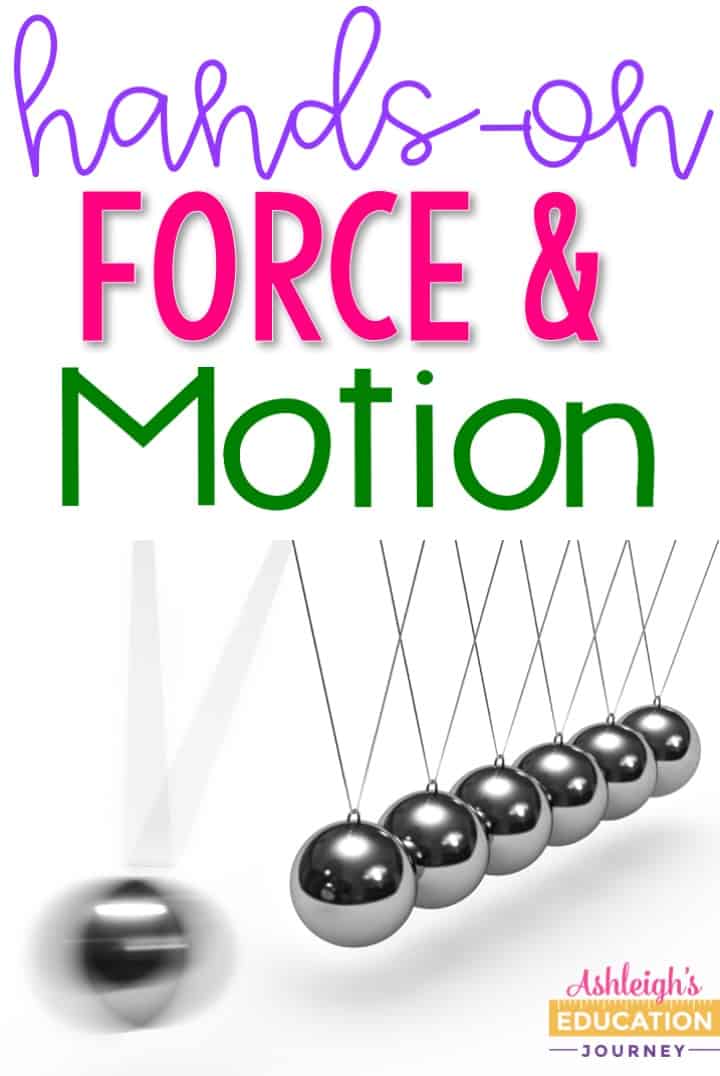