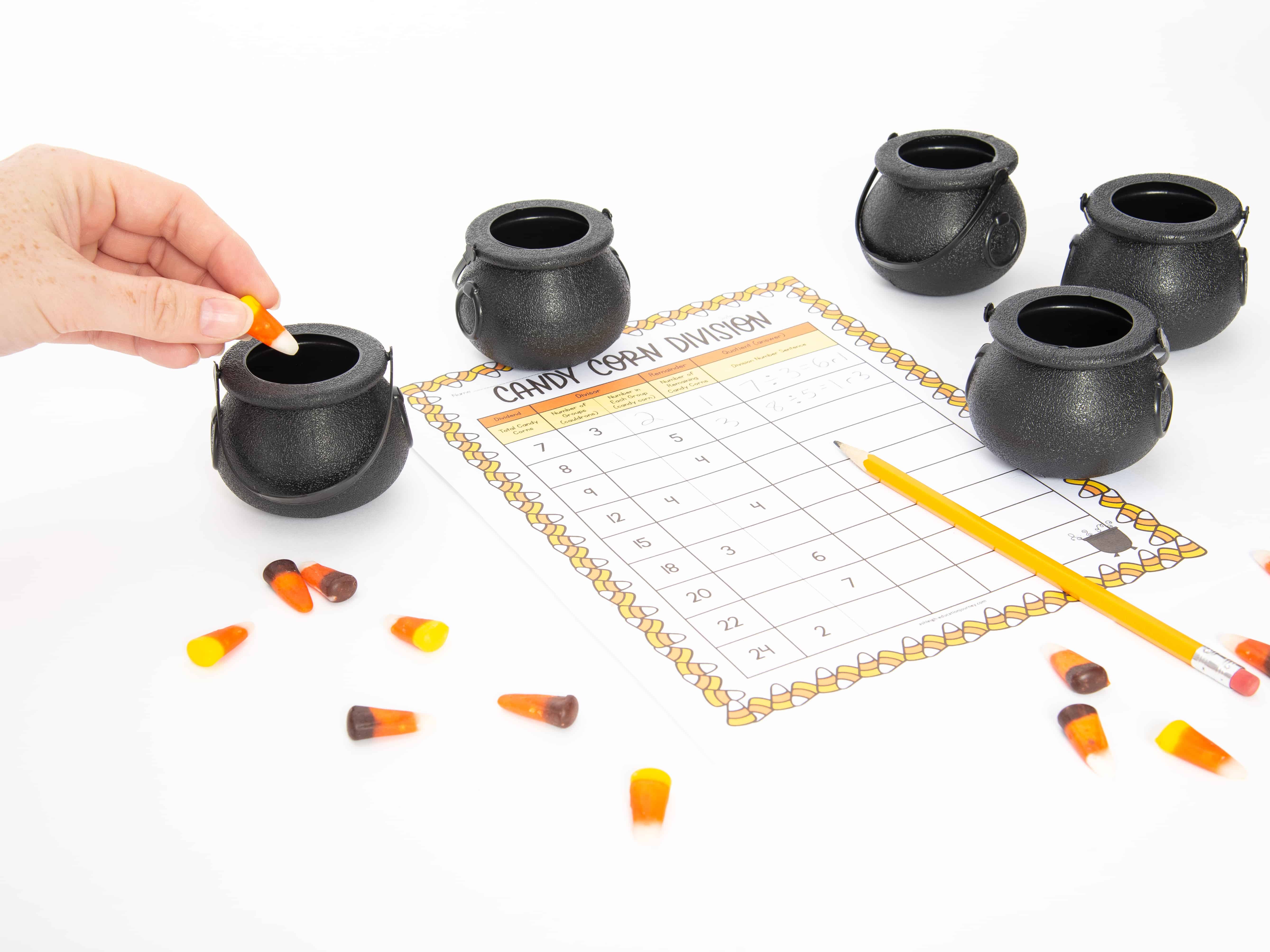 I’ve had an idea brewing for a few days now that is a great way to introduce or review the concept of division and remainders. {Sorry, I couldn’t resist.} Last week I started my division unit and noticed that my students had some trouble determining the difference between the number of groups and the number of items in a group. I came to the realization that there were a few conceptual misunderstandings, so I decided to spend a little extra time teaching the concept of division. I wanted my students to see that division could be one of two situations: missing number of groups or missing number of items in a group. I put a twist on one of the lessons I blogged about here and gave the activity a Halloween spin. 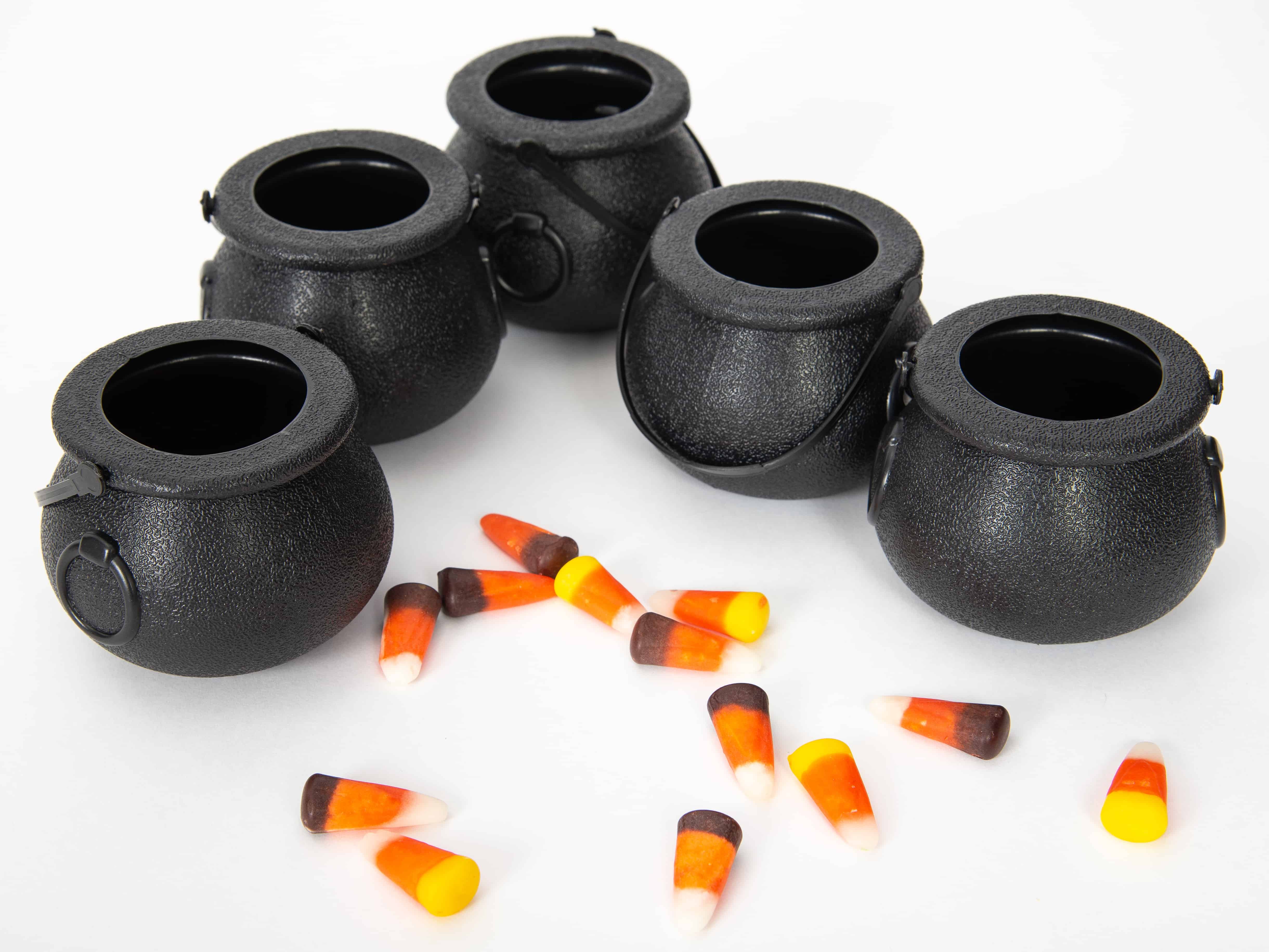 I bought small black cauldrons to use as my groups and mini candy corns to use as the items to place in each group. I found inexpensive cauldrons on Amazon and heard that they were also available at Party City. 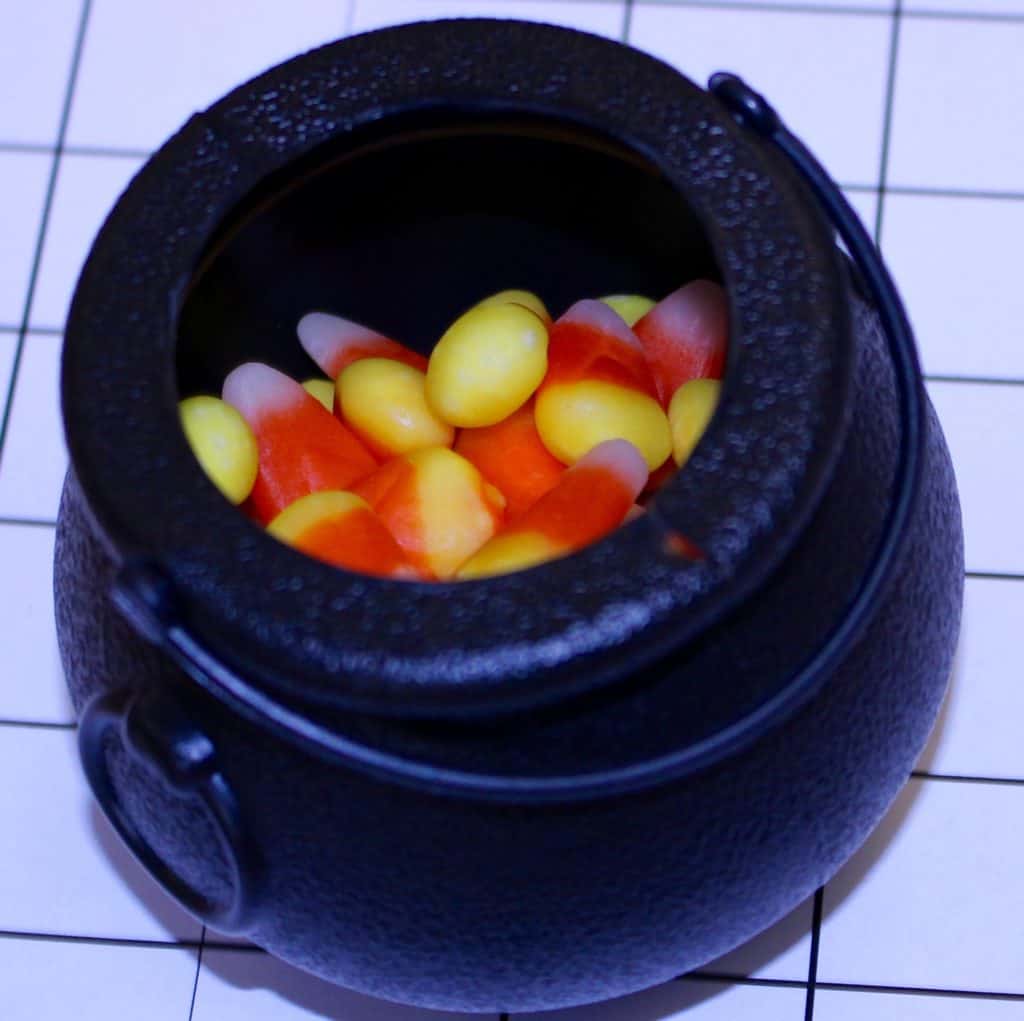 I had students work with a partner, mainly because I didn’t want to purchase any more cauldrons that I had to:) It would have worked wonderfully if each student had their materials too. I gave each student a Candy Corn Division worksheet that you can download here.  On the printable there was a table that indicated how many total candy corns were to be used for each division problem. Then, students either saw how many groups (cauldrons) were needed or how many items (candy corn) should be placed in each group. Students used the cauldrons and candy corn to solve the problem and wrote a corresponding division number sentence. I used a version of the activity included remainders, but I also created a version with no remainders for those who many not be ready for remainders. I also included a black and white version and a color version. 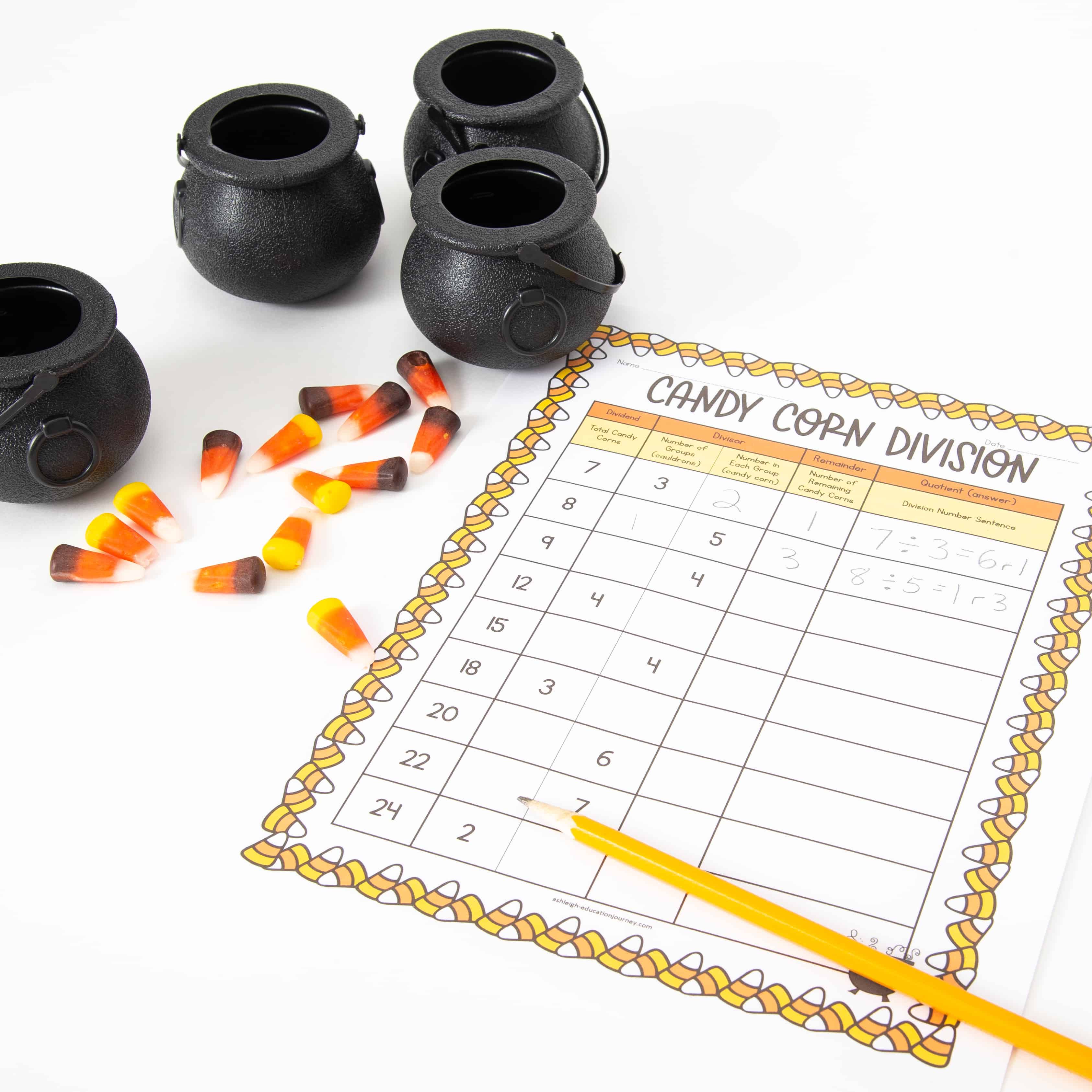 I was able to see several ah-ha moments as students literally placed their candy corns into the cauldrons to create equal groups. I was able to address the disconnect between the act of dividing and division number sentences. 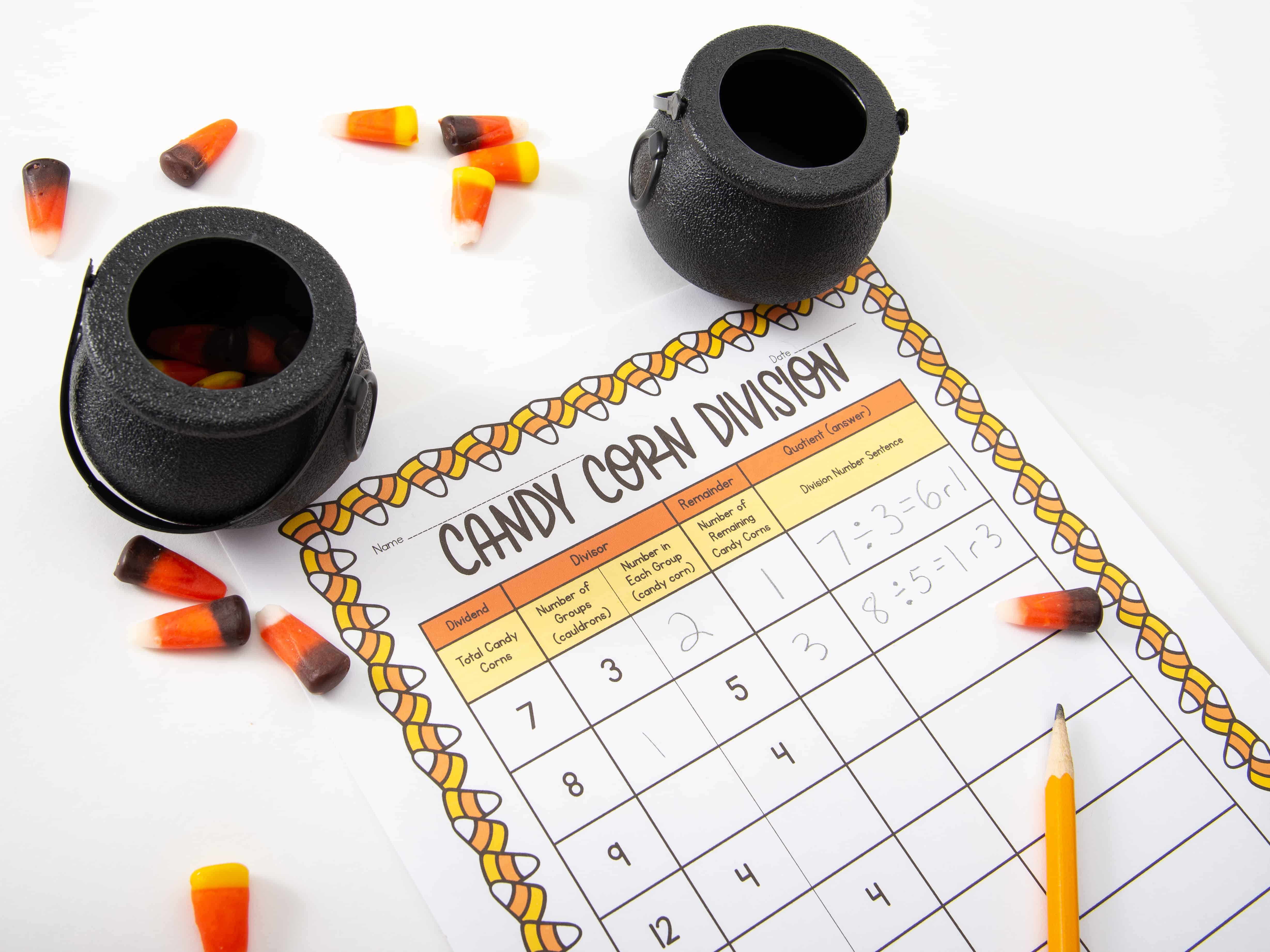 When students completed the table, I let them eat their candy corn. (I did have them wash their hands before beginning this lesson). Now I have to decided what to do with all my cauldrons. I want to use them again before Halloween is over. Any ideas?