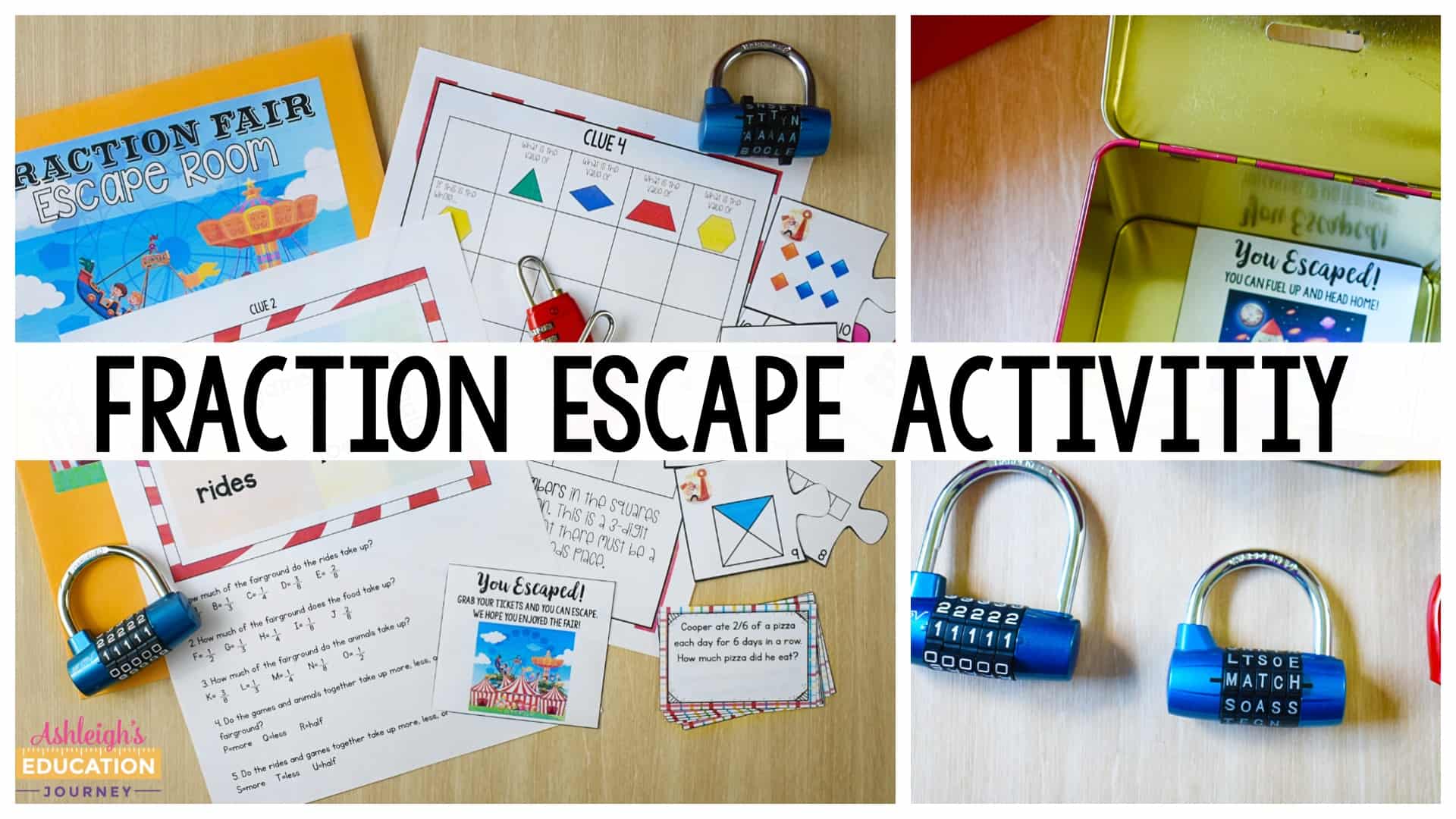 Last week when my students walked in the classroom and saw the escape boxes set-up, they started bubbling with excitement. I was asked no less than 100 times, “Are we going to do an escape today?”.  I let the suspense build until they just about couldn’t take it anymore, and then I affirmed that we were doing our Fraction Escape Activity.

Yes, this did require a bit of prep, but that excitement over a very challenging math lesson made everything so worth it! This type of activity is best used as a culminating task, not an instructional lesson. These tasks would have been way too advanced for my students at the beginning of the fraction unit.

As in all of my escape activities, I have students work in groups of four. I’ve found that a larger group decreases participation. It’s a little too easy for one or two students to take over. Groups of two or three would work, but that would also increase my prep and materials needed, so I stick with groups of four.

I gave each group an envelope that has everything they need to escape the “Fraction Fair”. I laminated any set of cards, so that I can reuse them. While I rarely print anything in color, I do for this activity. Since I only print one set for each group, it doesn’t feel so wasteful. I also gave each group a locked escape box. If I were using the digital version, I wouldn’t give students the box. Instead, they would use their Chromebooks. 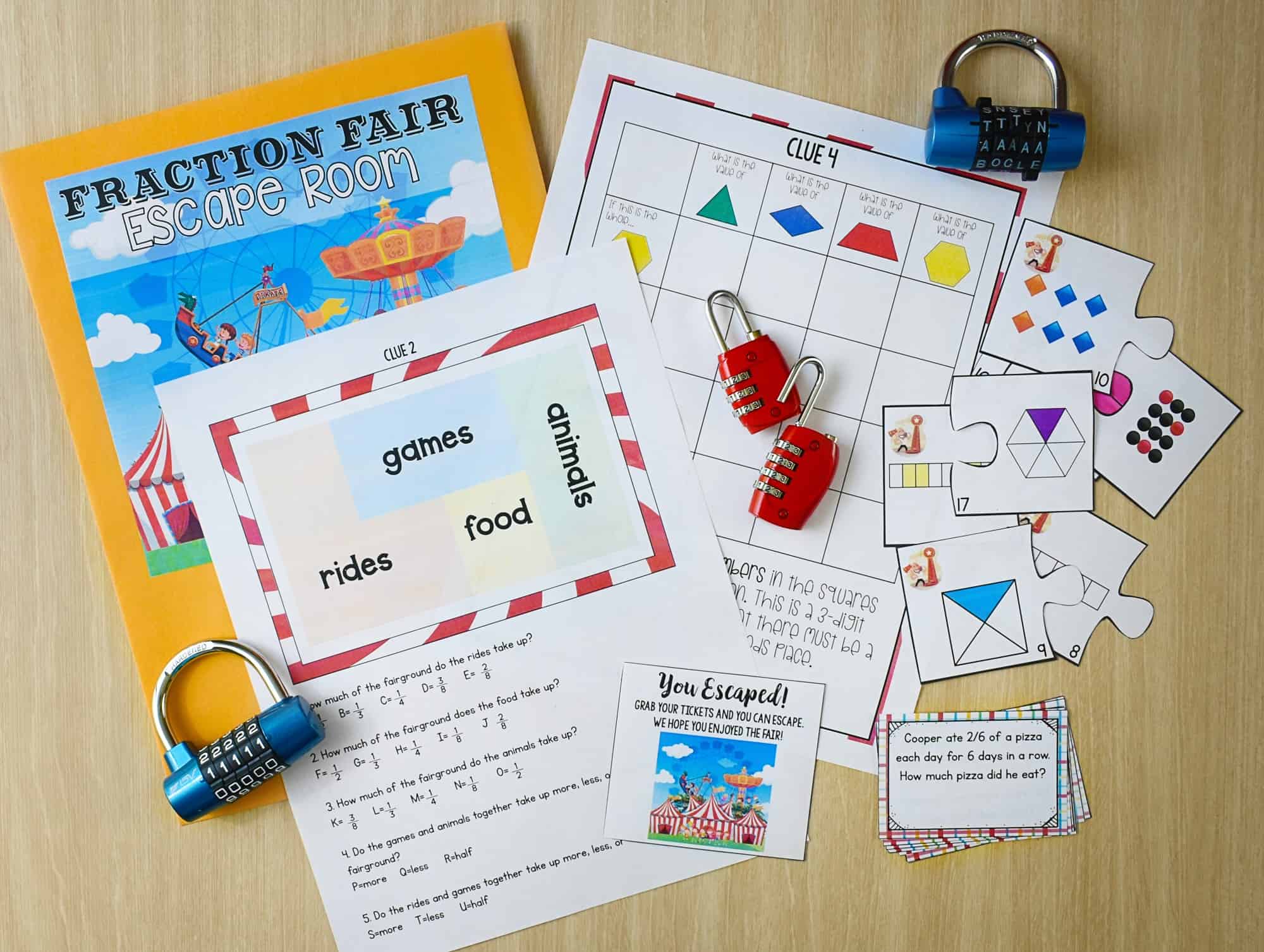 Ideally, students would begin by reading the directions carefully. But, they don’t. Every time I’ve ever taught this lesson, students  immediately get started and then realize they have no idea what they’re doing. Then, they’ll raise their hand and say, “We don’t get it”.  I don’t help until they can articulate the directions, and I see that they’re actually confused. Otherwise, students develop a pattern of learned helplessness.

In clue one, students match equivalent fractions puzzle pieces. For example, they would match 5/10 with 3/6. After students match the puzzle pieces, they look at the numbers formed on the puzzles. They ADD each of those numbers together to get a 4-digit sum, which happens to be the 4-digit number code for the first lock. Over the years I’ve watched students struggle to keep themselves organized. I have seen more than one group correctly match all the equivalent fractions and then shuffle the cards back together before cracking the code. To help students understand the directions and to stay organized, I include a picture example on the directions and a very detailed recording sheet. 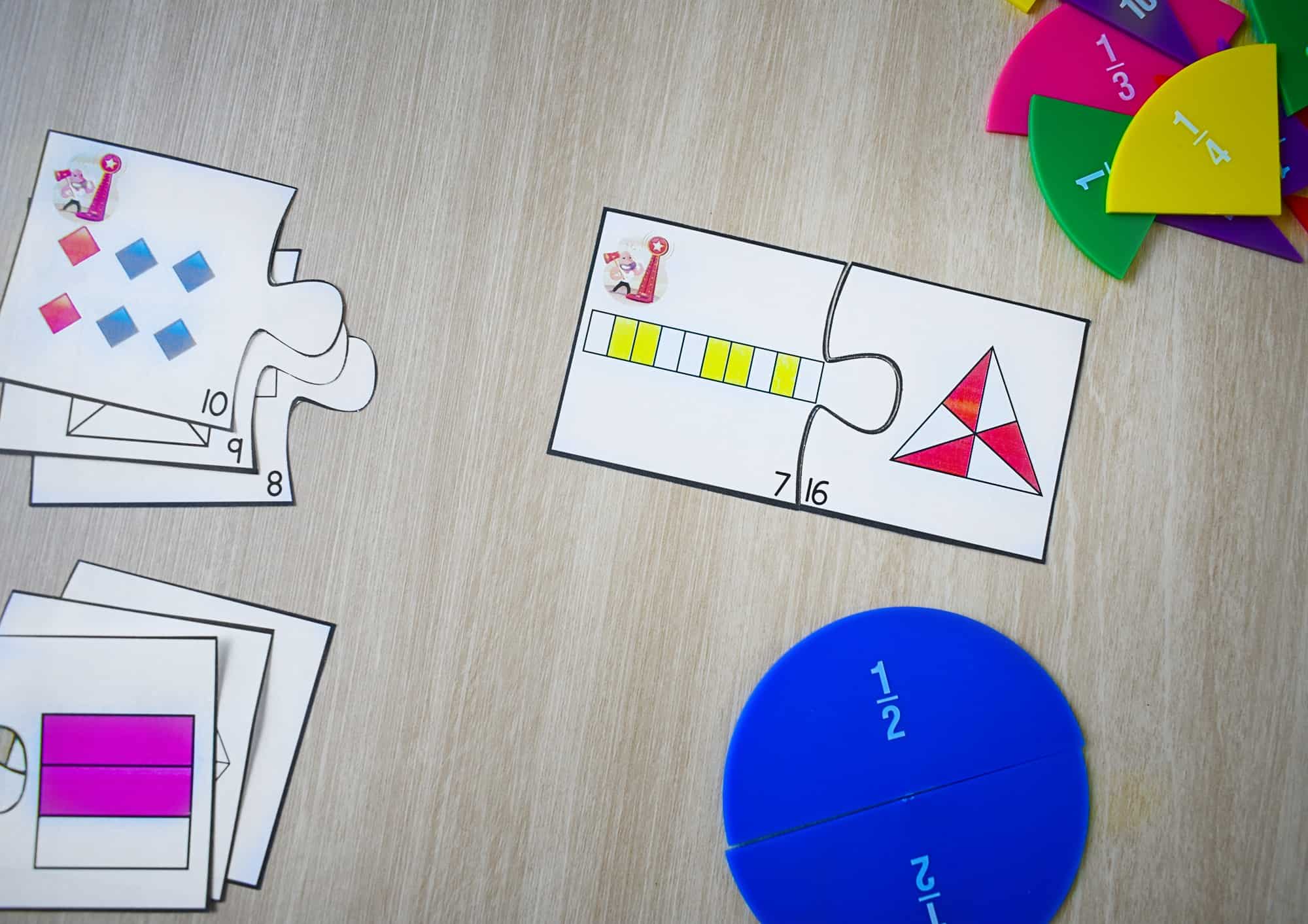 Once students open the box, they’re ready for the next clue. In this task, students once again work with equivalent fractions. Some of the questions, like the first one, are fairly easy to get students started. But, of course that changes. They have to stop and REALLY think about the whole and how many parts are in the whole. They can’t rely on procedures or memorization. As they solve each problem, they circle the correct answer. The letters they circle form the code to the 5-letter lock. 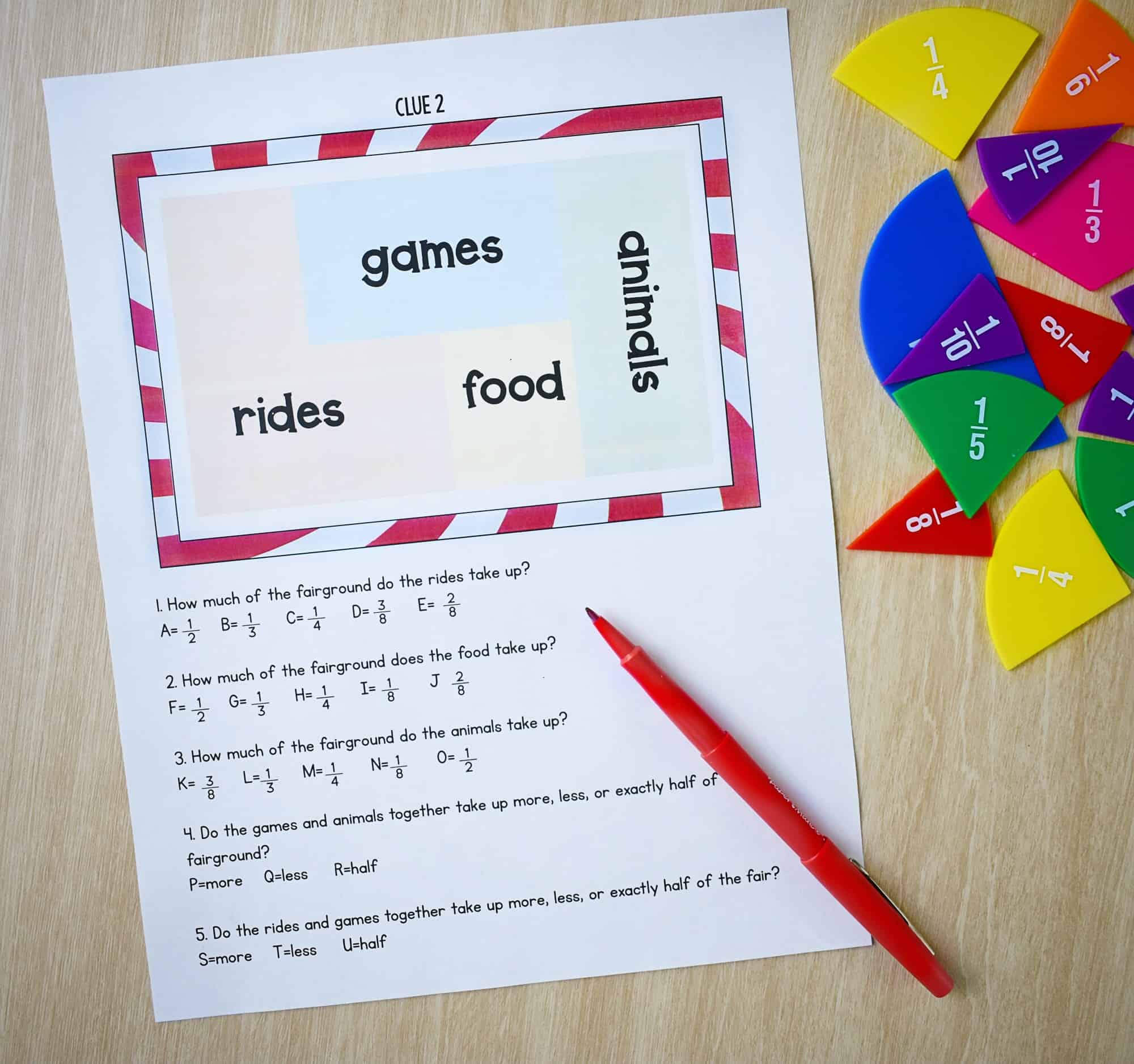 In the third activity, students solve fraction word problems with both addition and subtraction problems. As students solve the problems, they write their answers on a recording sheet to keep themselves organized as they crack the code. Students use the decoder wheel to determine what color to use for each number/answer. 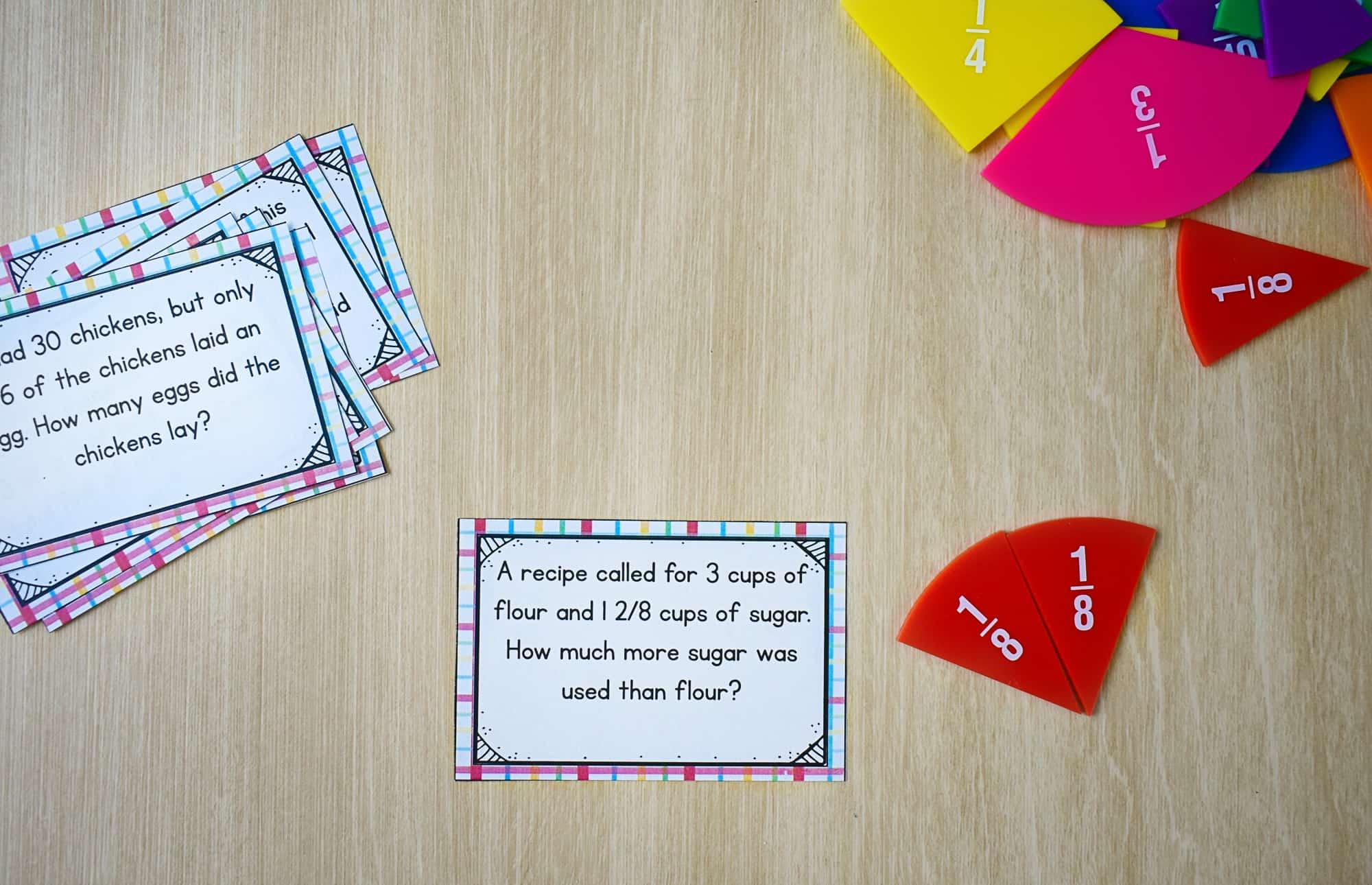 The last activity is my favorite, because it almost always stumps students. Once again, it forces them to slow down and to think about the relationship to the whole. The first row is rarely ever a problem. But you can guess what students will do with the hexagon in the second row. Yep, one-half. That shows how they’re trying to label wholes and halves as a set amount, rather than showing flexibility. When they do this, I don’t jump right in and tell them what the answer is, but I do intervene and redirect their thinking. When students finish the table, they add the whole numbers in the squares together to find the last code. When students open the box, they get an escape ticket. You can add a prize if you want, but it’s definitely not necessary. 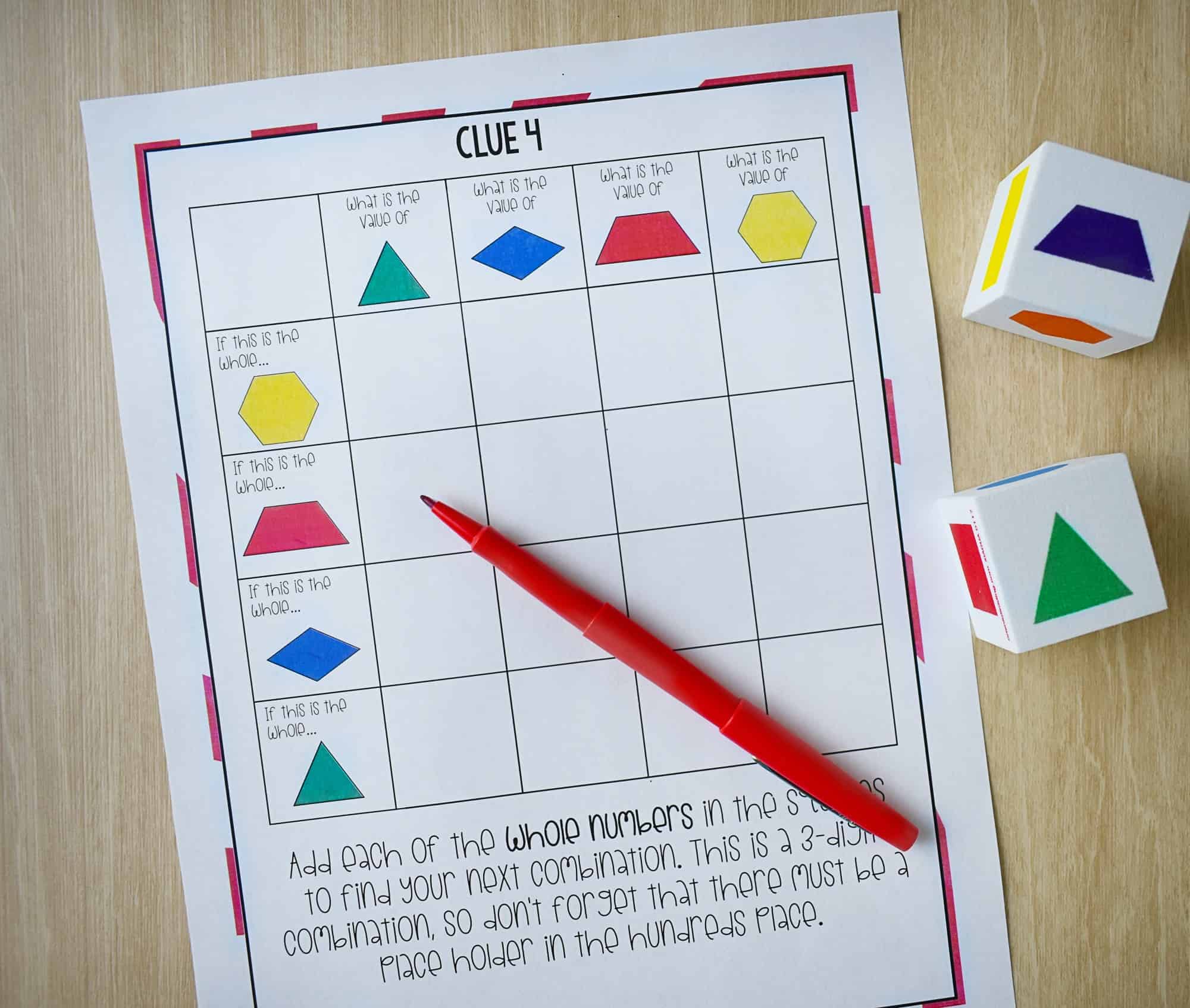 As you can see the physical version of the boxes offer a TON of engagement and novelty, but if you’re not ready for that yet, you can definitely start out with the digital version. If you want to learn more about implementing these types of lessons, be sure to check out this blog post.

I created these tasks to be a challenge and to require understanding of fractions, not just repeating steps. I typically give students our entire math block to escape, and sometimes, some groups don’t make it. I don’t try to make this an everybody wins activity. While the disappointment of not escaping is real, the stakes are pretty low, so it turns into a good learning opportunity. I’d venture to say that 90 percent of the time, a group doesn’t escape because they don’t work well together, not because of the math. And that has also led to some really good conversations and eye-opening moments for kids.

You can see this Fraction Escape Activity here!