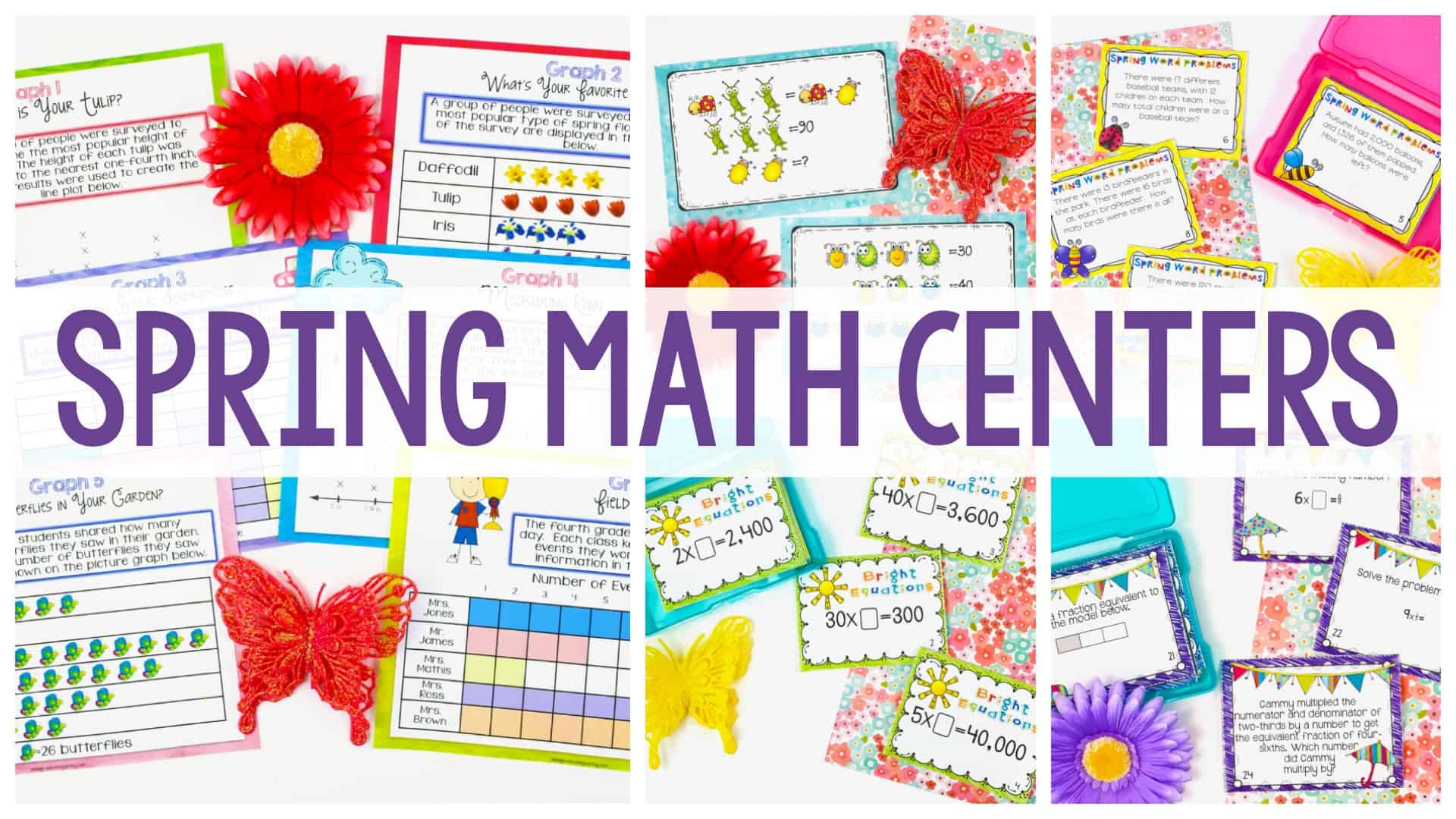 It is absolutely crazy to me that it’s already time for to begin thinking about spring math centers. Last year was my first year back in fourth grade after several years in third grade, and one of the resources I missed the most was my 3rd Grade Spring Math Centers. I wanted to create them last year, but we all know the stress of changing grade levels. You absolutely cannot do it all in one year! Thankfully, I have them ready to go this year. These centers should take me through all of March and April. Of course in April we’ll be out a week for spring break (yippee!!) and I won’t have centers during testing week. In case you’re looking for a few math ideas to make test prep engaging for your students, I’ve shared the activities included in my 4th grade Spring Math Centers in this post. Hopefully, you can get a few fun ideas!

The first activity, Spring Logic Puzzles, happens to be my favorite activity in the pack. I love it, because it’s fun AND because it is quite challenging for my students. It requires students to have a bit of productive struggle, which is important for students. It also requires the application of math process standards. My students LOVED the Christmas version, so I’m sure they’ll love these too! 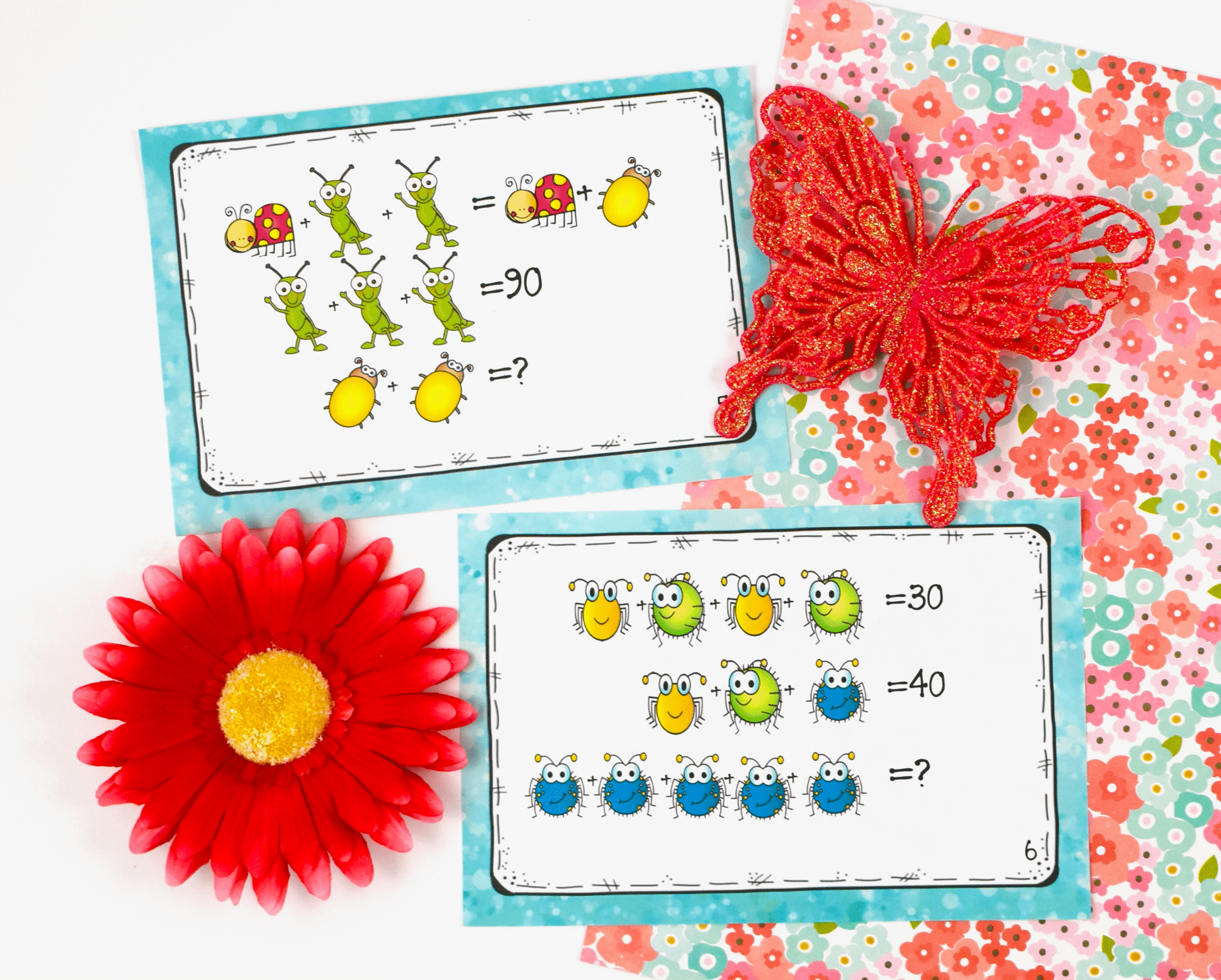 The next activity is my Spring Word Problems. In this activity, there are 24 addition, subtraction, multiplication, and division word problem task cards. I’ve also included a few multi-step word problems. I tried to include a variety of word problems that required students to analyze what the problem is asking. 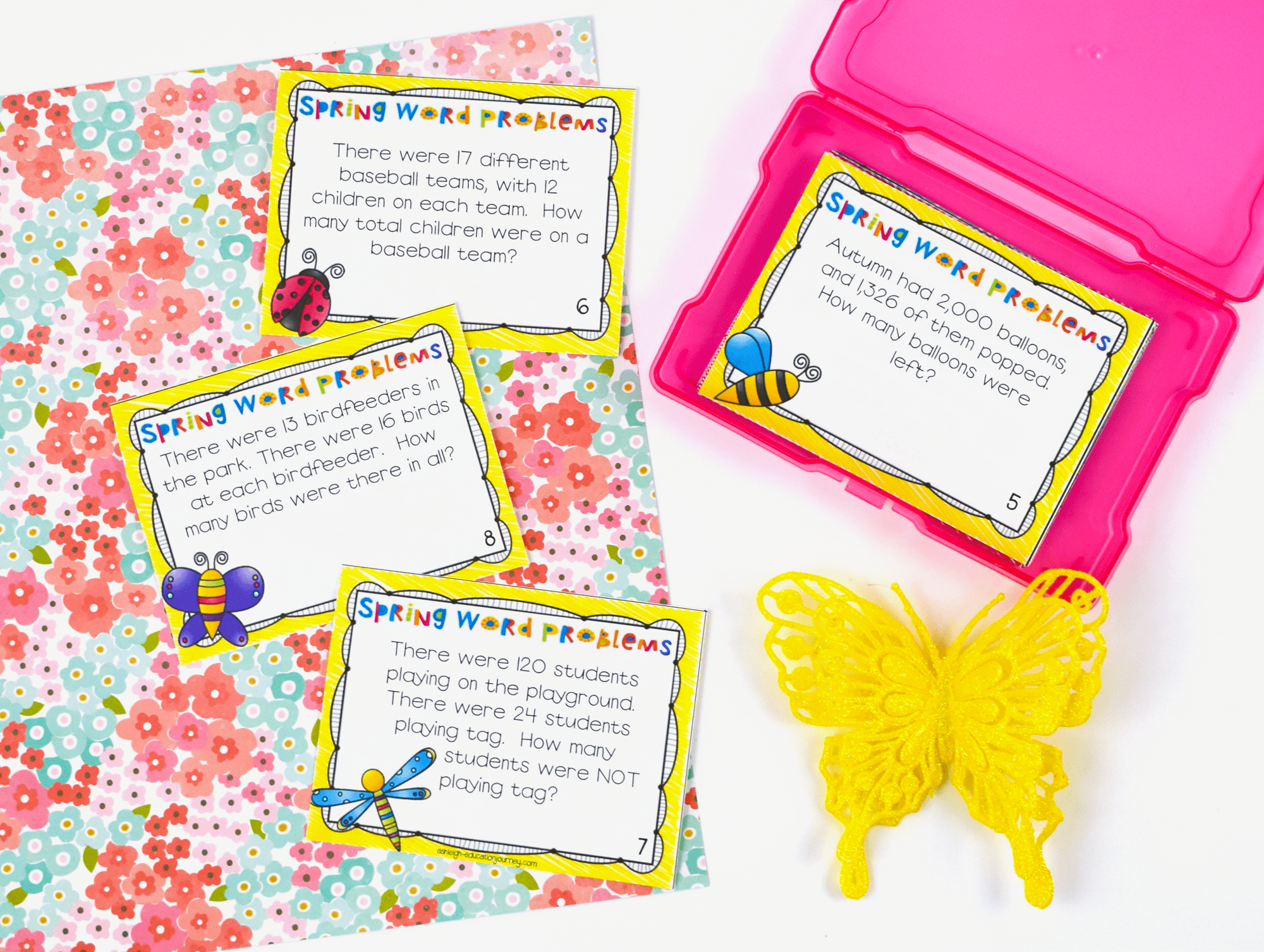 In the Bright Equations activity, students work with multiplication and division equations, with an emphasis on multiplying and dividing by multiples of 10, 100, and 1,000. They will find the missing number in multiplication problems where the first and second factor are missing. They will solve division problems where the dividend and divisor are missing. 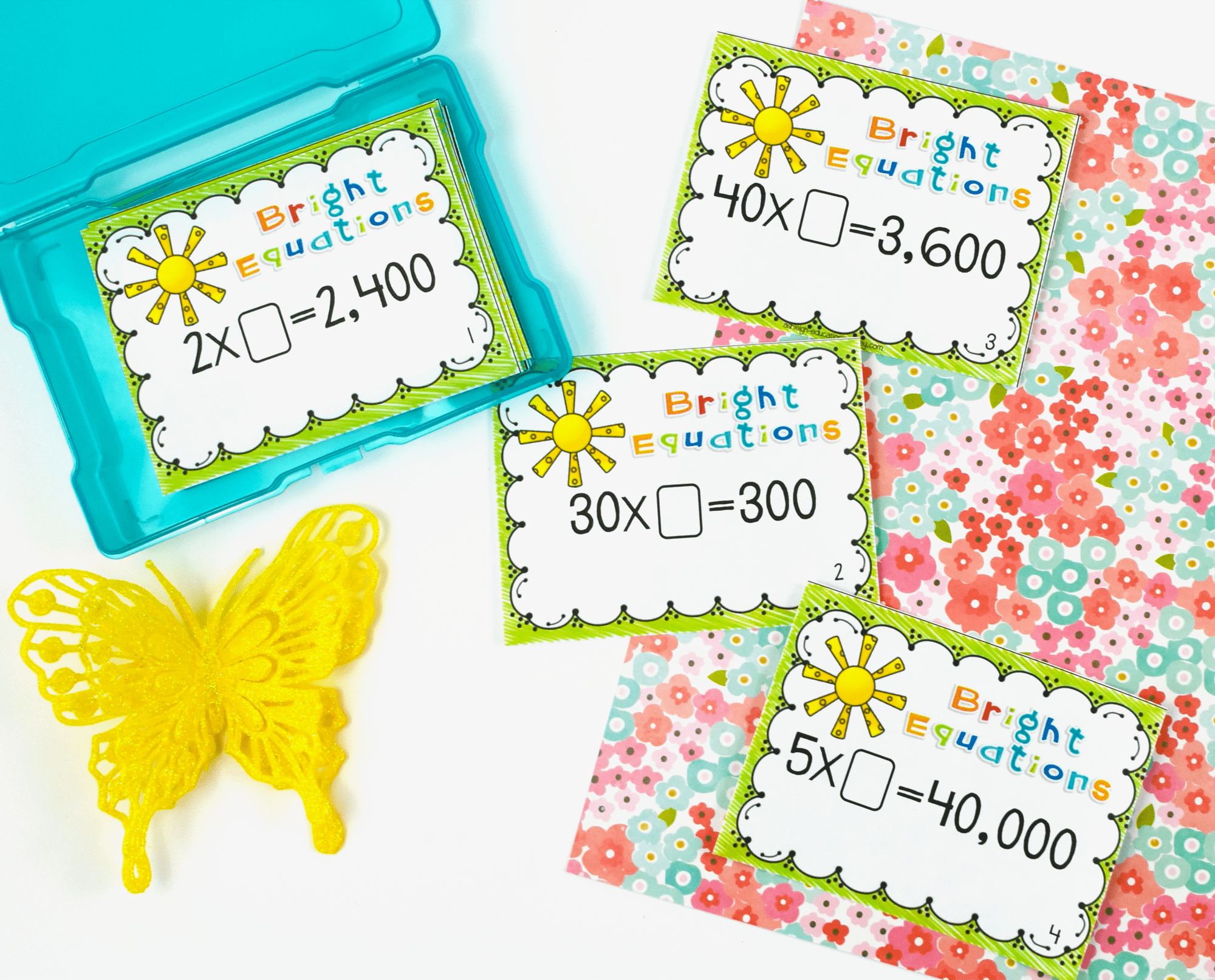 In the Tweeting for Geometry activity, there are 28 geometry task cards that will allow students to practice identifying, drawing, and problem solving with geometric figures. Students will also work with parallel and perpendicular lines. 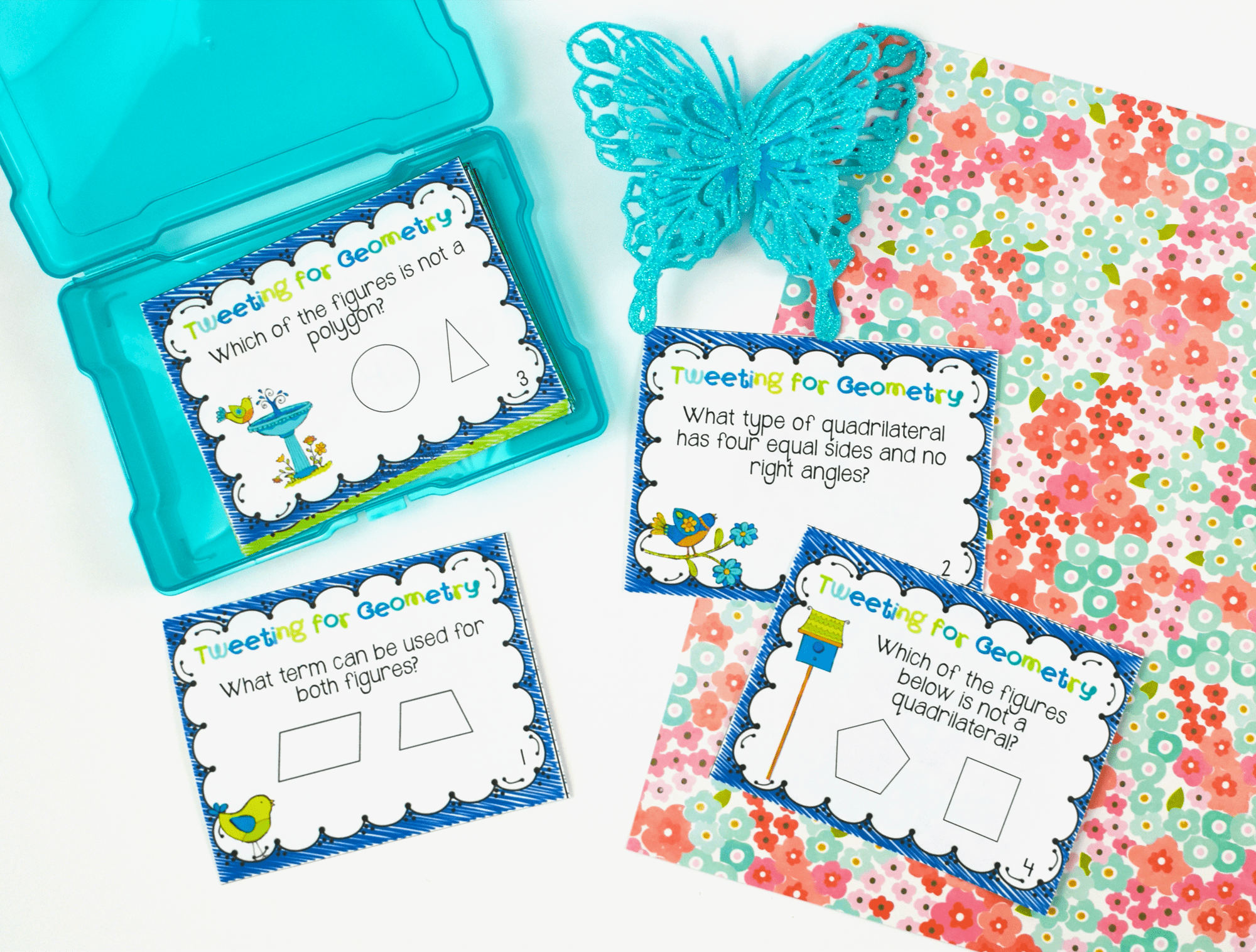 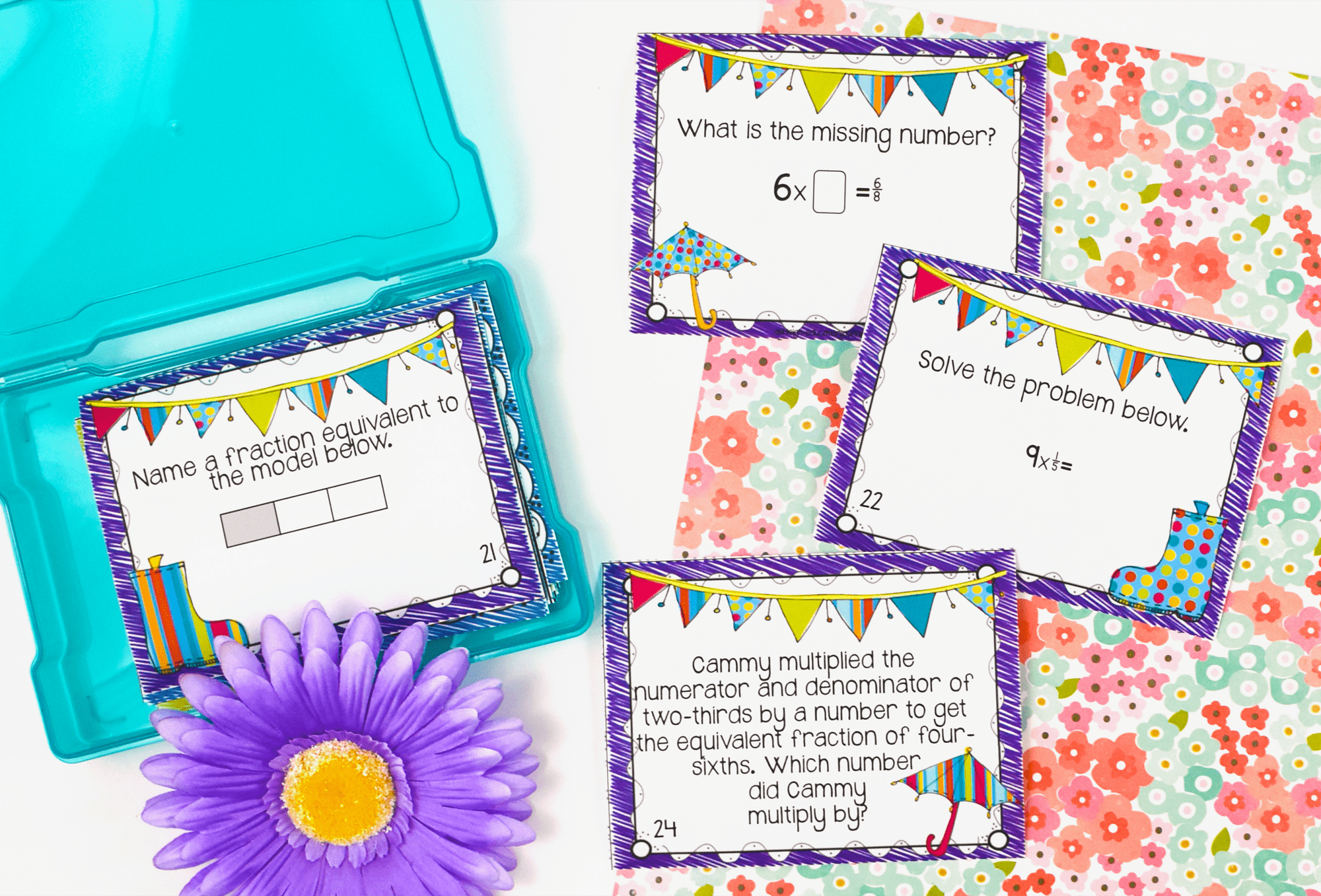 Spring Graphing is another one of my favorites. There are six graphs for students to interpret in this activity. For each graph, there are four task cards where students will answer questions from the graph. There are vertical and horizontal bar graphs, picture graphs, and line plots to the nearest one-fourth inch. The graphs include numbers that require students to multiply and divide larger numbers for additional computation practice. 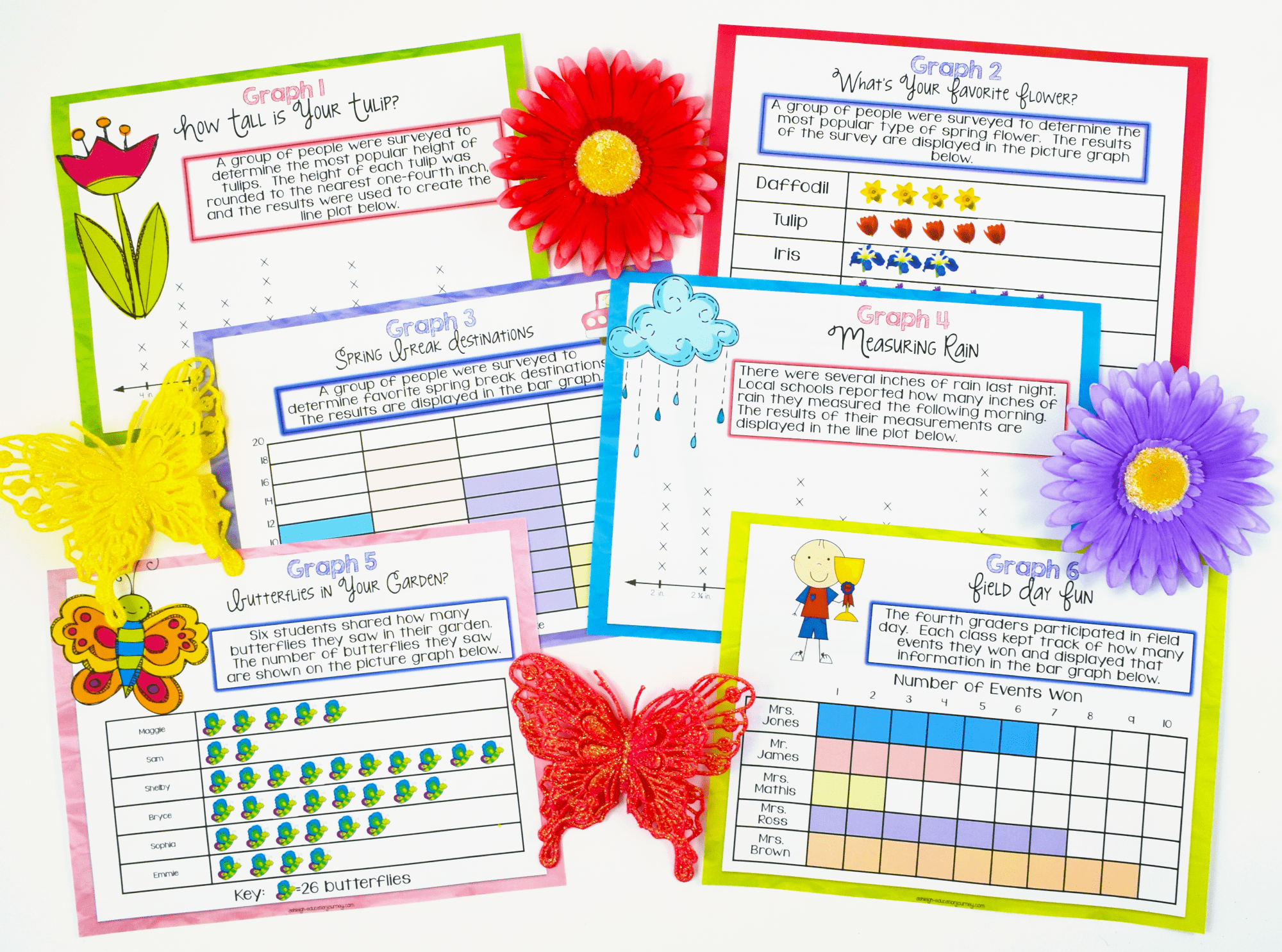 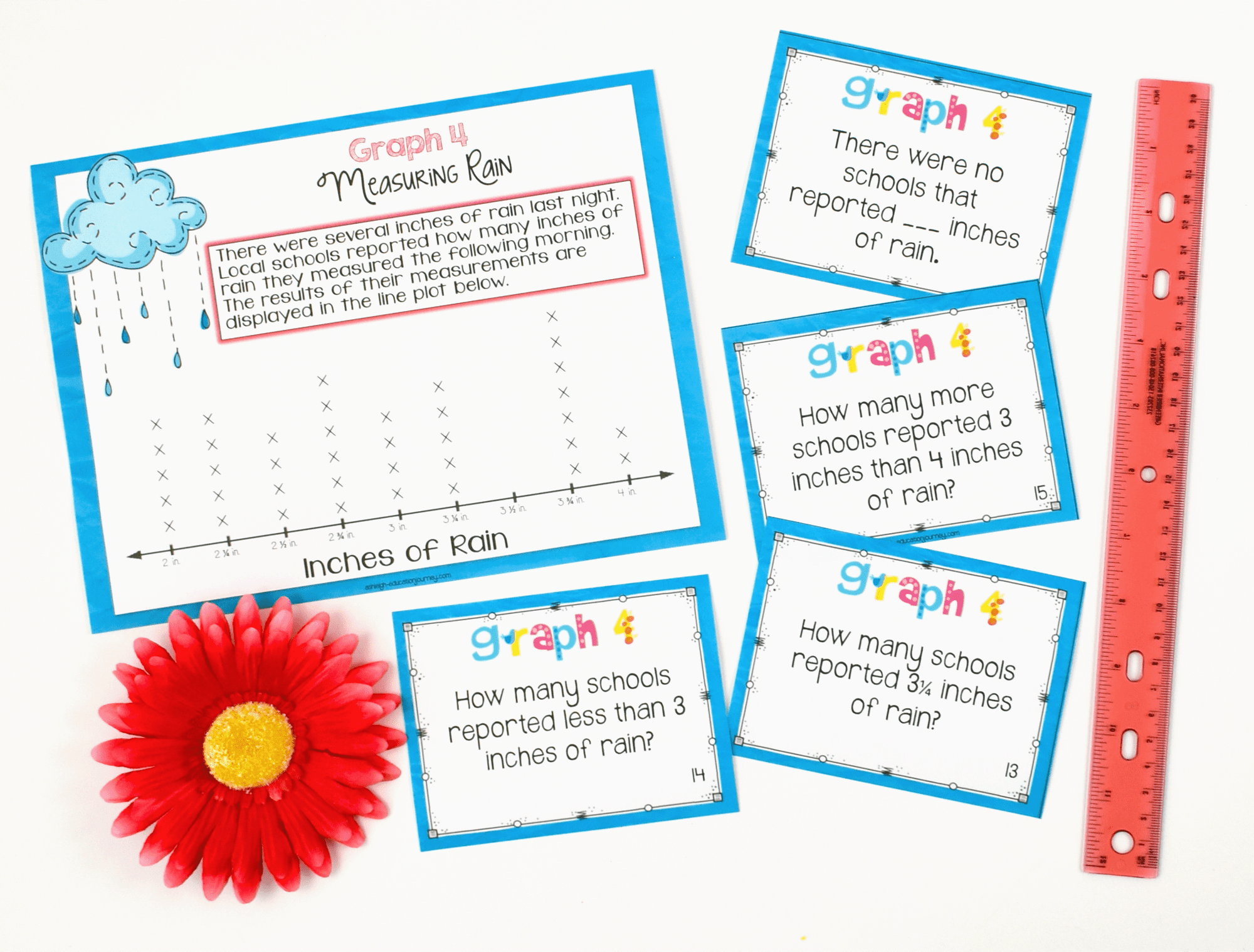 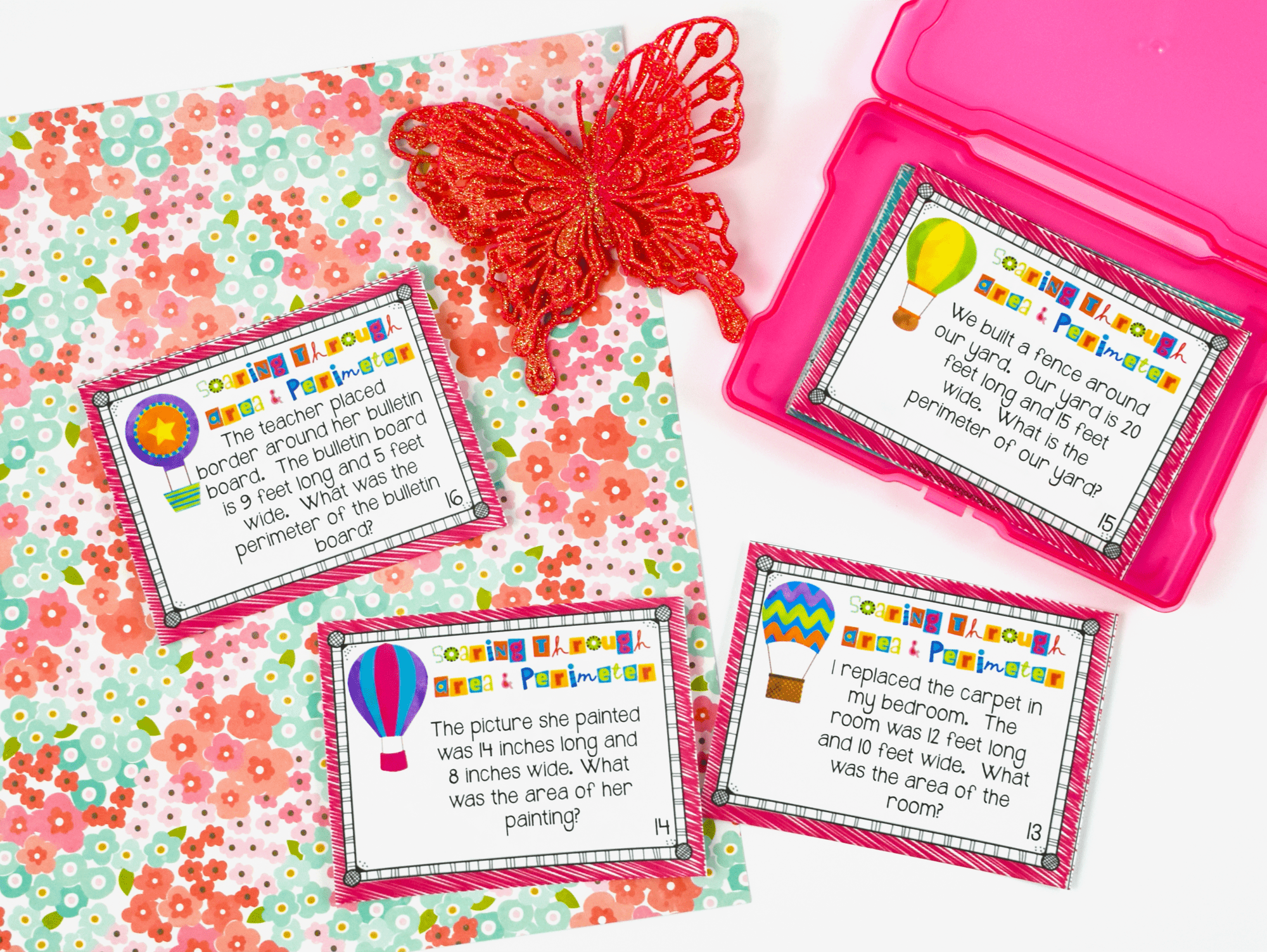 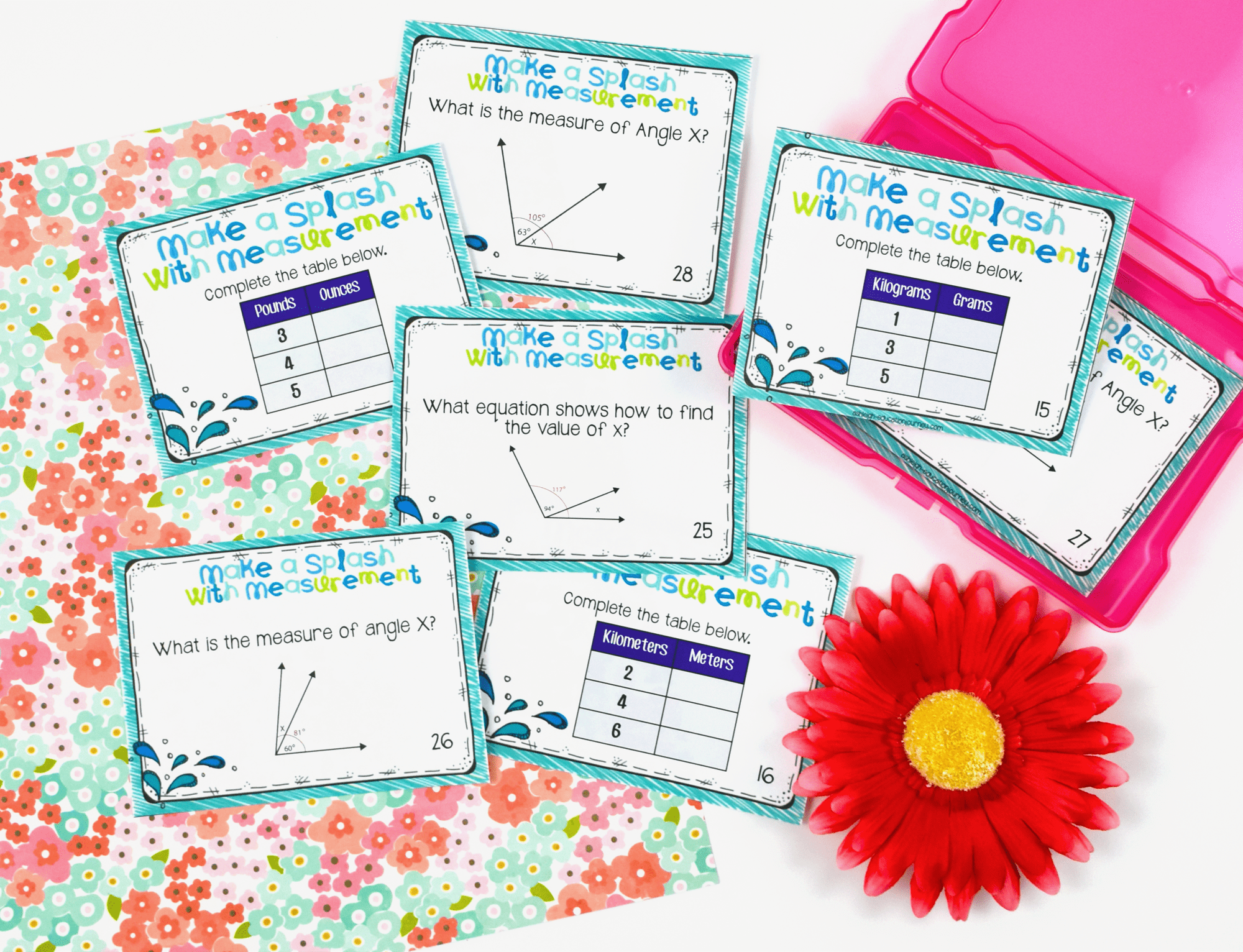 In Spring Symmetry, students complete the remaining half of a spring picture. I like to have students highlight the line of symmetry. My students LOVED the Christmas version of this too! It was so hard for them when they first started, but after a little practice they improved so much! 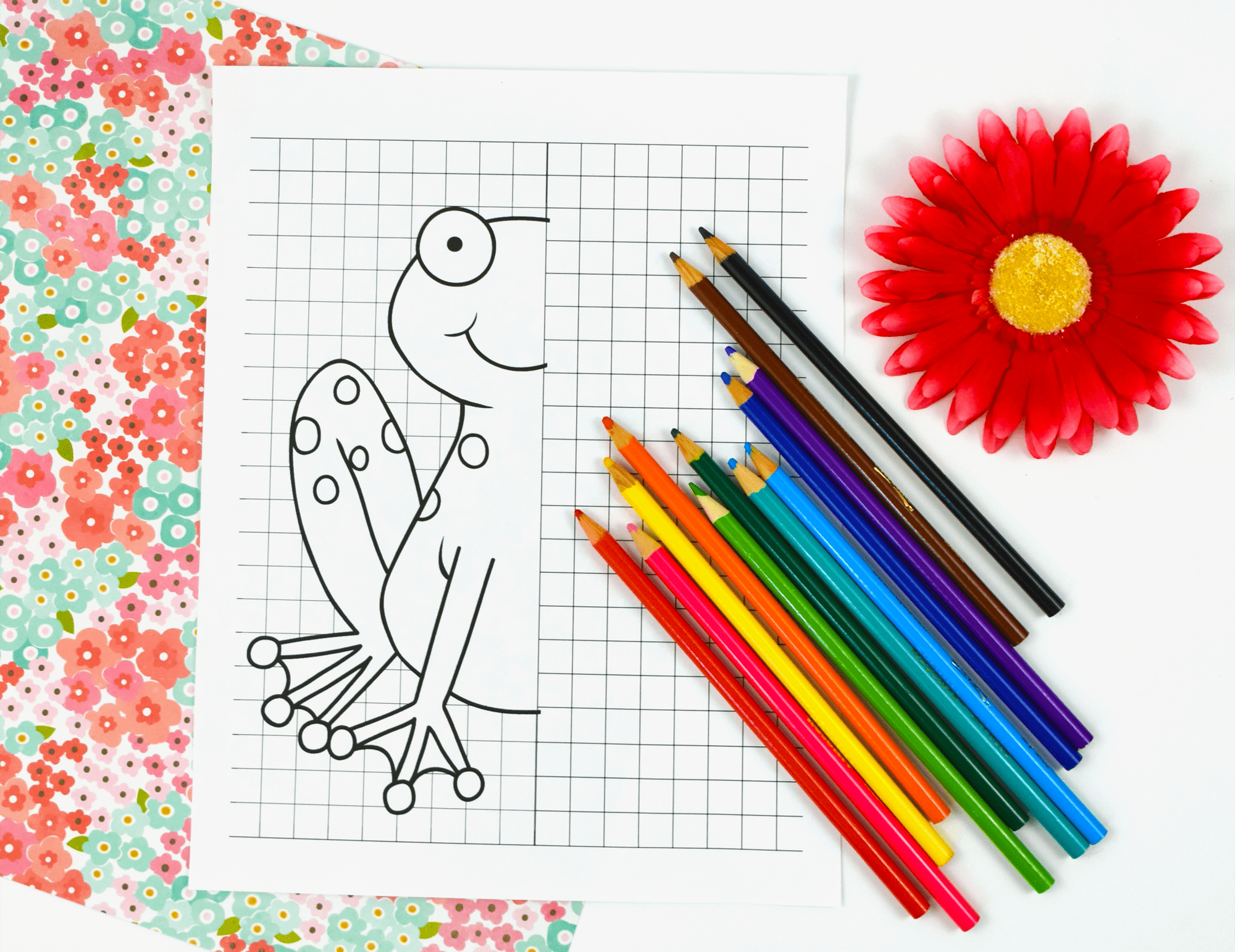 The final activity, Garden Mystery, reviews the decimal standards. This is written to reflect the popular game of CLUE where students use clues and the process of elimination to solve a spring mystery. I’ve found that I have to require students to show all of the answers for each problem BEFORE stating the solution of the mystery. This slows them down a little, because they like to rush through this to solve the mystery as quickly as possible! 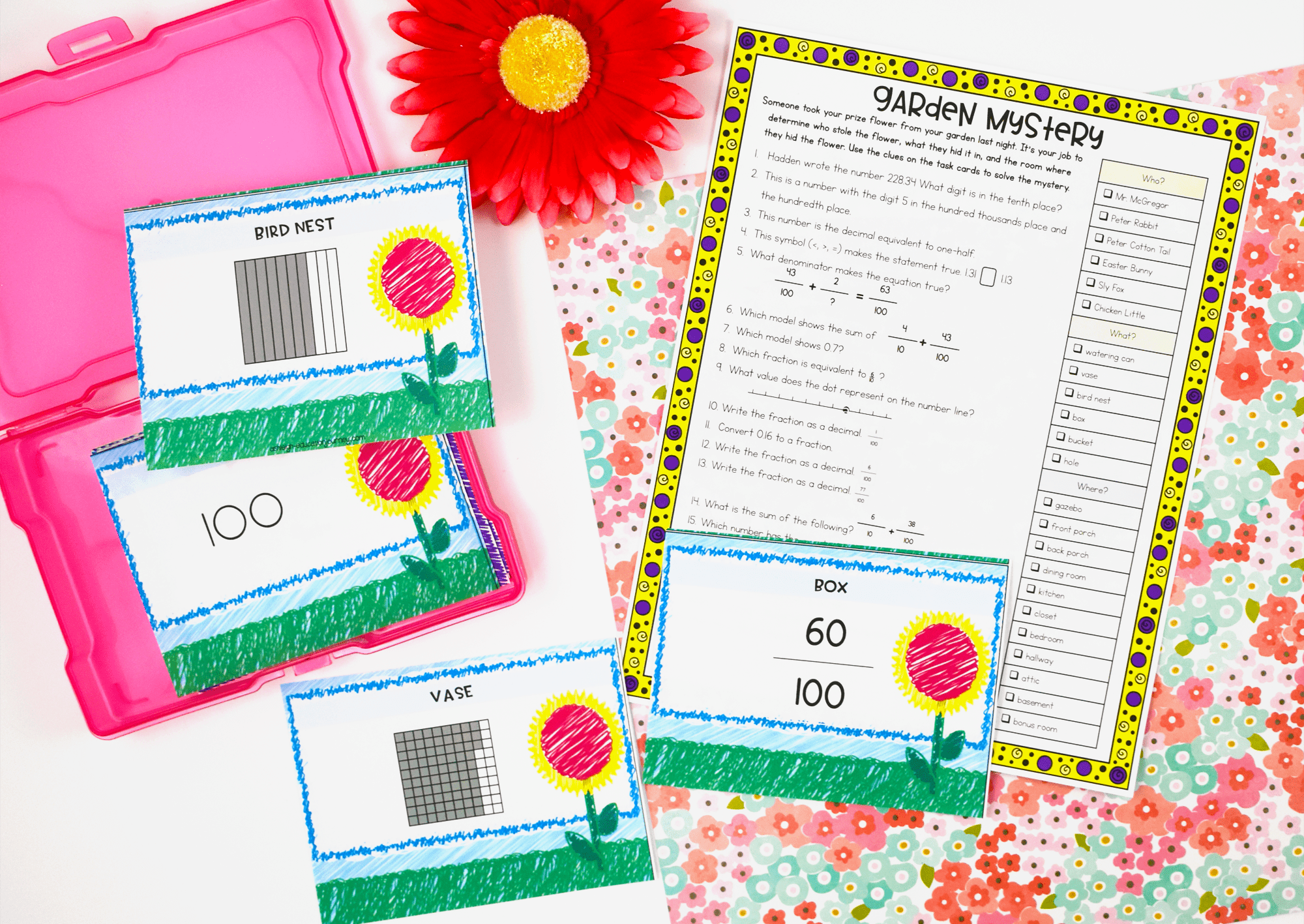