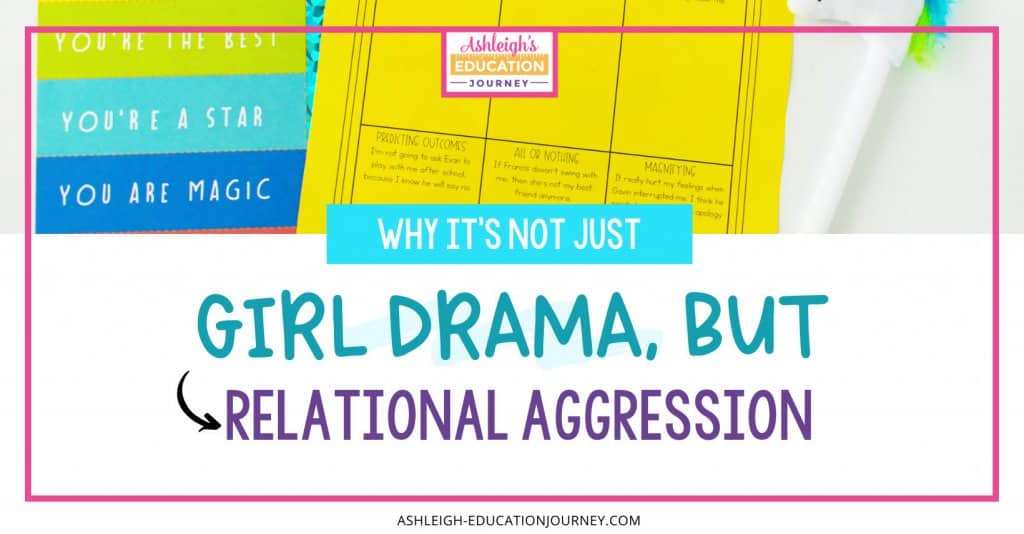 As a teacher, I felt like one of my weakest areas was dealing with what is often called “girl drama.” When I saw this as a teacher, I struggled to find the root of the issue, to have time to deal with the problem, and to know what to do about it. I was also uncertain of where to draw the line between normal friendship issues and problematic behavior. My tendency was to encourage the student to find someone else to play with or to ignore the situation.

However, as I saw these behaviors increase in frequency and intensity, I couldn’t ignore my instinct that there had to be more I could do as a teacher. That’s why I made it my mission to learn more about “girl drama”. Each of the lessons I describe below can be used on its own. I have created accompanying printables that you can see here.

Below are seven lessons I teach my students to prevent relational aggression and to equip students to handle conflict, as well as stand up for themselves.

Lesson 1: What Not To Do

As I work with students on these thought processes, I encourage them to reframe their thinking into positive thoughts. 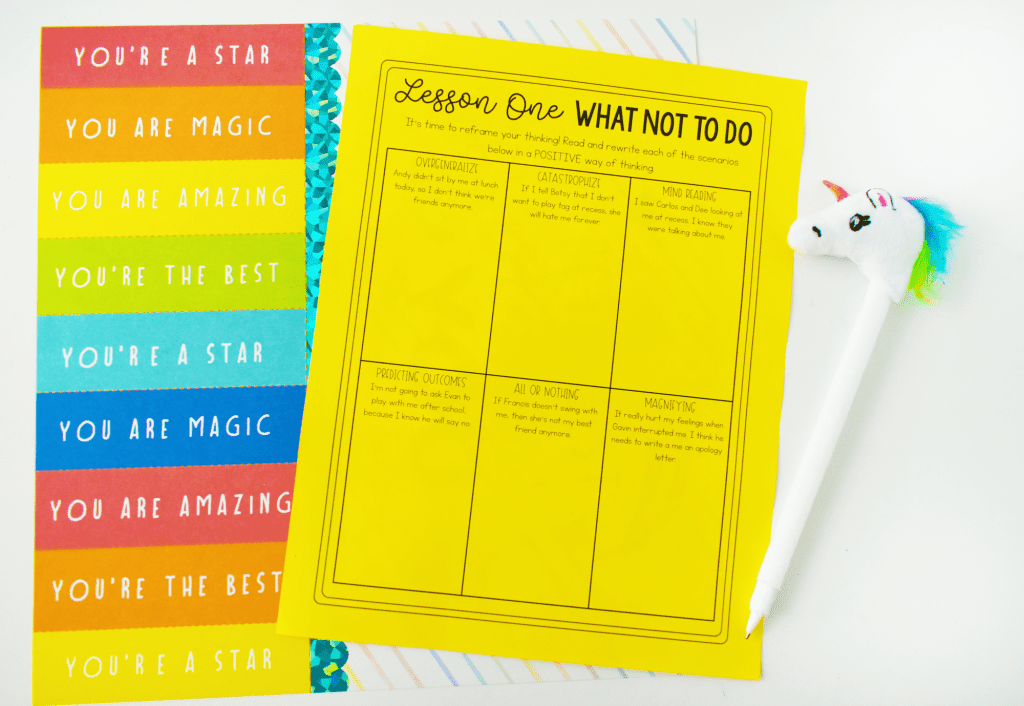 In my next relational aggression lesson we begin to talk about gossip and rumors. It’s normal for students to be involved in each other’s lives, and curiosity is a natural part of childhood. However, there is definitely a line that can be crossed. I love using Trudy Ludwig’s book Trouble Talk to introduce the topic of  gossip and rumors. 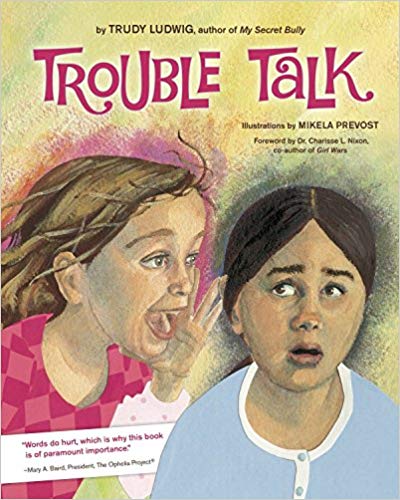 After reading the book, I define the terms gossip and rumor. Gossip is information about the behavior and personal lives of other people. A rumor is information that has been passed from one person to another person that has not been proven to be true.

I ask students to share experiences where gossip or rumors hurt them. Caution-please preface the conversation about NOT sharing anything their parents wouldn’t want them to share. I also share personal experiences of when someone gossiped about me. I also share about a time I gossiped and how I hurt a friend by doing so. It’s important for our students to see that we all make mistakes and what we did to correct those mistakes. We also discuss what to do when we hear gossip or rumors:

It’s so important to allow students to practice this with role play. If I’m short on time, I may break a lesson into two days, but I think it’s worth the time. Here are a few role play ideas:

Once again, I follow the lesson with some application practice. 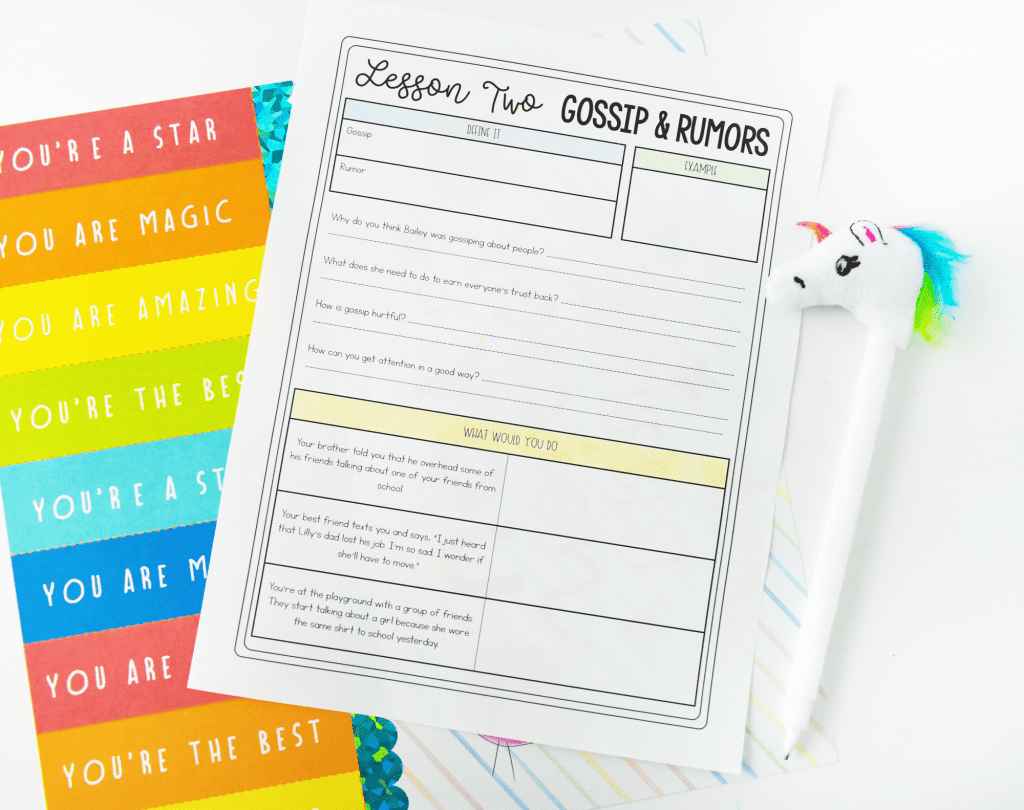 Close friendships are not a bad thing. We all want relationships with people who will stick with you through thick and thin and offer support, empathy, and understanding. The problem with alliances comes when they result in social exclusion of others. Once again, Trudy Ludwig has a great book called My Secret Bully for discussing alliances with students. 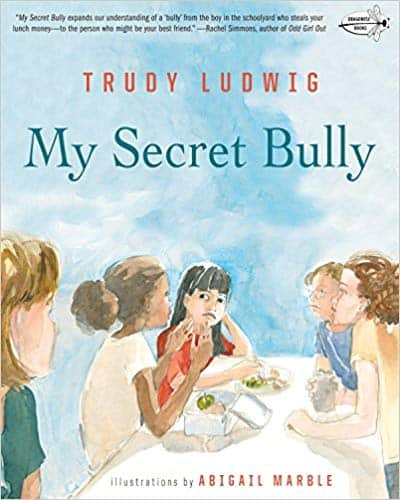 After reading the book, I define an alliance as a relationship between two or more people with an intention to exclude or act aggressively towards another person. We then spend time discussing alliances. I explain that it is a problem to get other friends mad at someone who has hurt them – to take joy from punishing someone with the help of our friends. It is one thing to turn to your friends when you have been hurt or are angry with someone. It is another thing to get your friends angry with someone else or turn them against someone else. After discussing and sharing, we role play to practice noticing and stopping alliance building.

Some topics for role playing include: 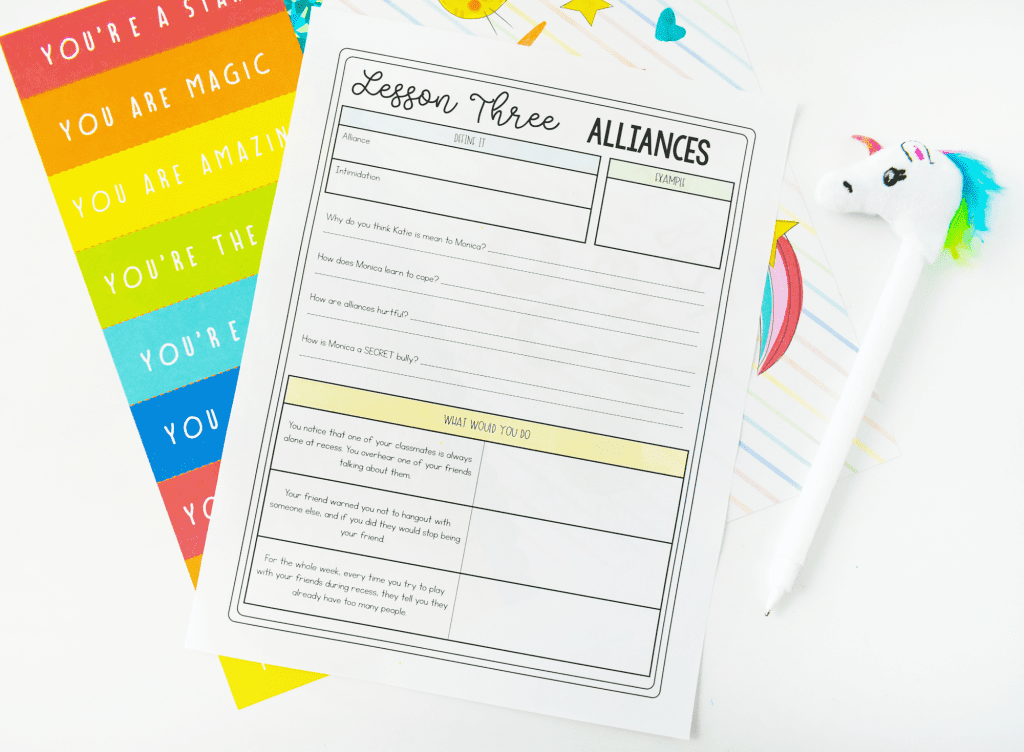 As I researched, I learned that good-natured teasing is a healthy part of a relationship and growing up. The problem occurs when teasing turns into taunting. It is also relational aggression when children try to embarrass others and throw in a “just kidding”. Regardless of how it’s done, public humiliation is never okay. Trudy Ludwig did it again with Just Kidding. However, reading the book on it’s own is not enough. You have to follow the book with conversations. 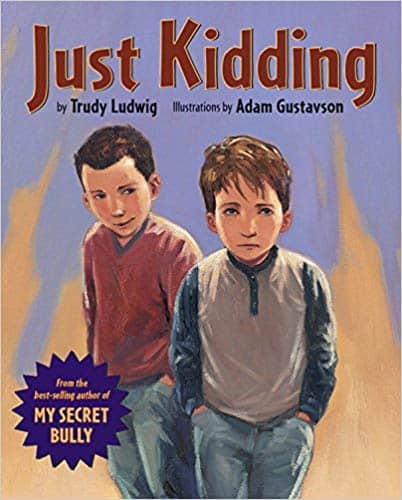 When defining teasing and taunting, I like to make a list of both, because it’s very helpful to see the difference between the two.

It’s important that students also understand that they may think something is just teasing, but the target is still hurt. Some people are more sensitive than others are or they are having a bad day. If our intent is to just kid around, then we should immediately stop when we see it hurts and make it right. It’s also important to remember that we cannot assume the other person is taunting us until we ask them to stop and they do not.

We should also point out the taunting isn’t always with words. Our body language and actions can also be a form of taunting. For example, if a student makes gestures or rolls their eyes behind someone’s back, that is taunting. It’s also wrong to make a joke of hiding personal property.

Once again, we follow the conversation with discussing social situations and role playing. Some topic ideas include: 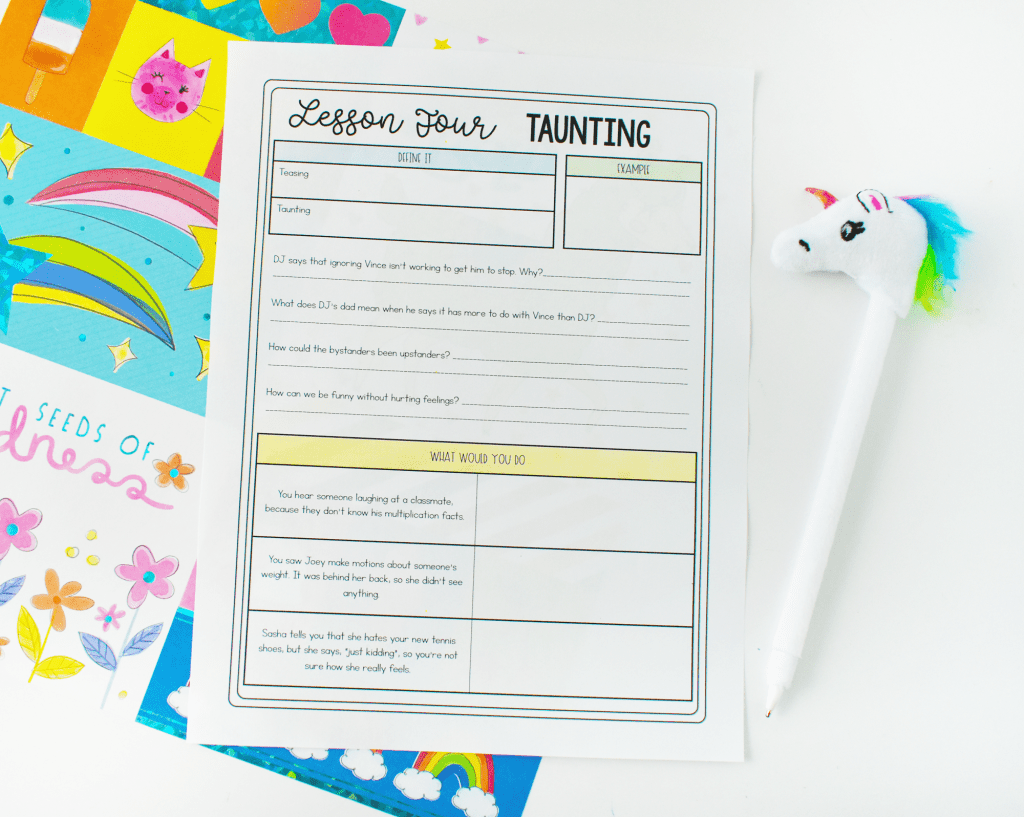 Social exclusion, otherwise known as cliques, are nothing new. But, they do seem to be forming at younger and younger ages. This is a topic where I certainly try to clarify that no, you won’t be close friends with everyone. However, it’s not kind to leave anyone out. To introduce the concept of social exclusion, I read Cliques, Phonies & Other Baloney. This isn’t a book that I read cover-to-cover. Instead, I preread and pick and choose what I read aloud to students. 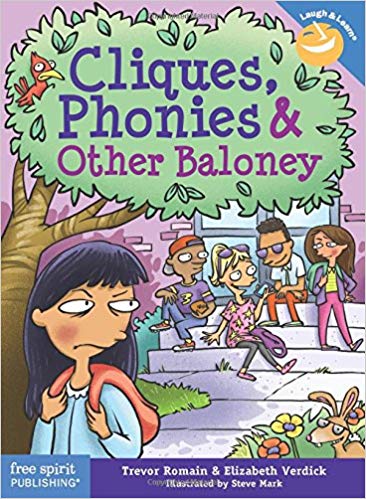 After reading the book, I define the terms clique and exclusion:

We discuss how friendship groups come together for the same basic needs, but are not exclusive. Positive friendship group speak to others in the halls, allow others to sit with them at lunch, and include outsiders in the group. Role play ideas include: 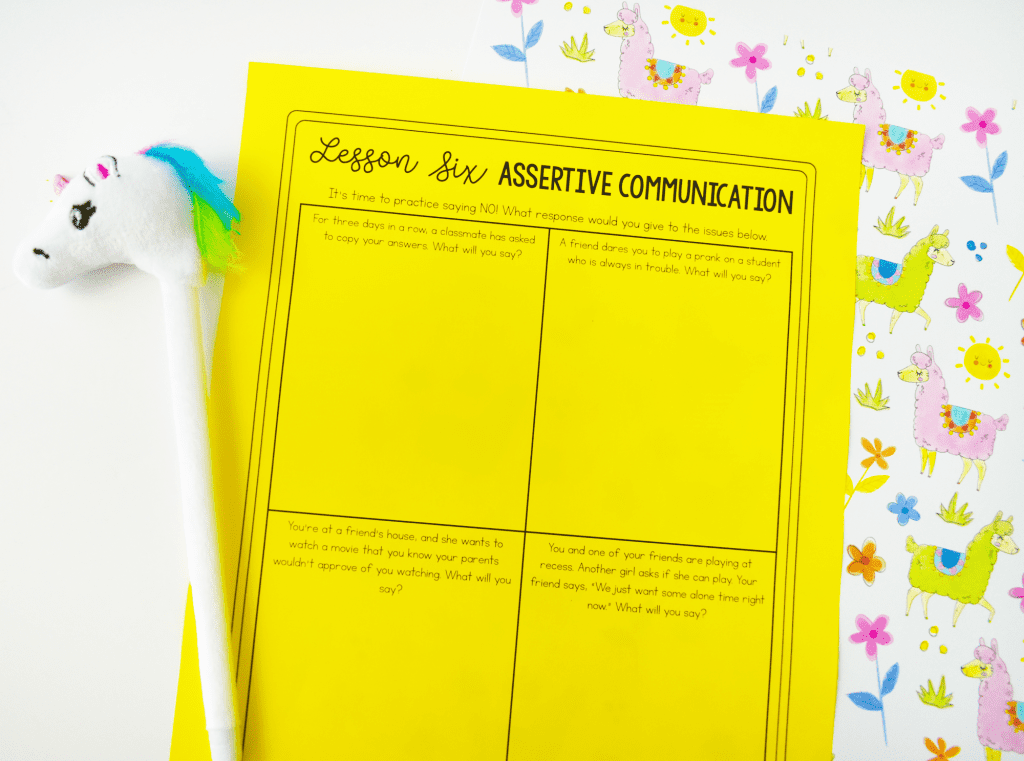 Despite our best efforts or our students’ best efforts, there is bound to be conflict within friendships and peers. Our students must be equipped to independently handle these conflicts in an appropriate way. Many times, our students revert to negative behaviors, so I like to teach this lesson with relational aggression Dos and Don’ts.

Conflict resolution is not something that you can teach in a day. Instead, it helps to make an anchor chart that displays these steps. As students encounter conflict, guide them as they navigate through this process until they are comfortable with conflict resolution. If you’d like to see more of the printables, you can click here. 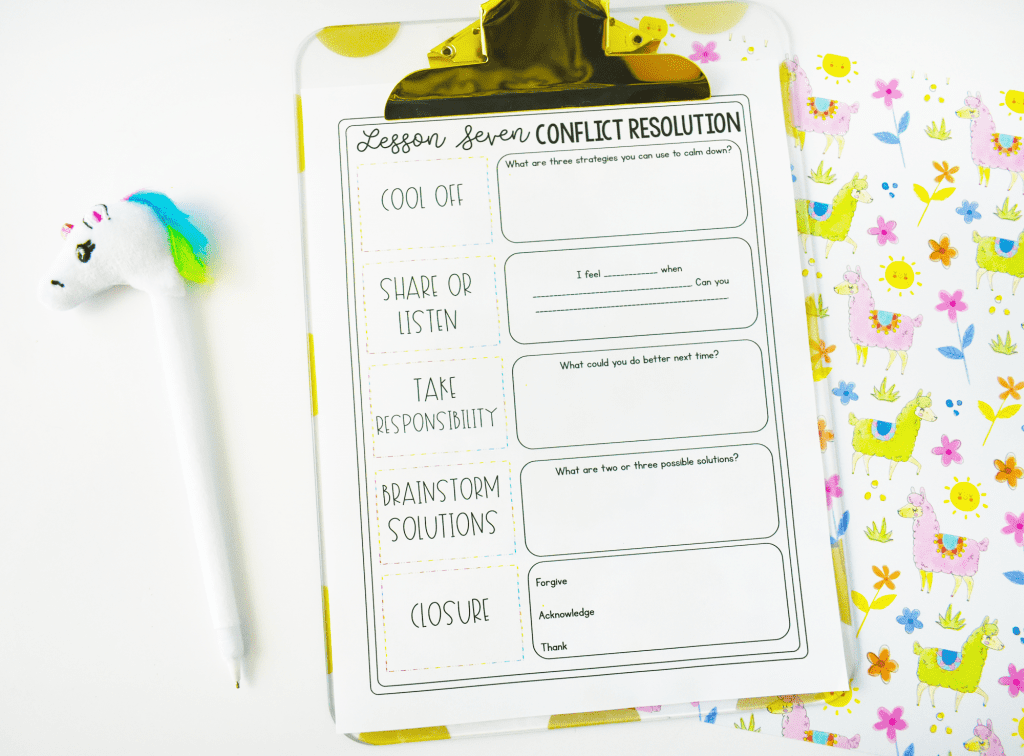 I completely get that this won’t fix everything. I also understand that ideally, relational aggression issues would be taken care of outside the classroom. But, our reality is that our students need these lessons. I want to equip and empower my students to be confident in who they are, how to recognize and avoid relational aggression, and how to stand-up for others.